In response to the recent budget deal which has already passed the House of Representatives, Taxpayers for Common Sense has issued a new report “Real Savings, Real Deficit Reduction: Relieving Budget Caps with Common Sense Savings in Fiscal Year 2014”, showing how $100 billion could be cut from the federal budget for fiscal 2014, completely offsetting the supposedly onerous cuts required by the sequester.  Here is a summary of what TCS has come up with: 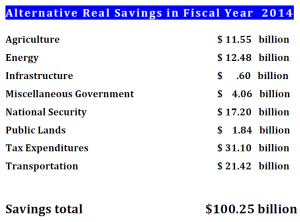 Of course there are many ways to achieve $100 billion in savings in a single year and this is only one particular way to do it.  But it is a balanced plan making roughly comparable cuts from many different agencies and also including a significant amount of tax expenditure savings.  It would, of course, be much better to also include adjustments to entitlement spending such as Social Security and Medicare.  A big reason for keeping the sequester in place, or offsetting it with equivalent cuts, as TCS is suggesting, is to create more interest in making necessary changes in entitlement programs.
Yet another way of accomplishing the same goal would be to keep the sequester spending levels in place but to give each government agency the authority to rearrange the spending cuts within its only agency.  This is what management should be doing anyway on a routine basis.
It is very disappointing that Congress will not do the job, one way or another, that is required to operate the government on a sound financial basis.  Let’s hope that the voters make big changes in the elections coming up in 2014!