With a new Congress just elected, this is a good time to reflect about what changes should be made in public policy. Our biggest economic problem is to speed up growth in order to provide more and better paying jobs.  In addition, a faster growing economy would bring in more tax revenue which would help pay our bills and reduce the deficit. 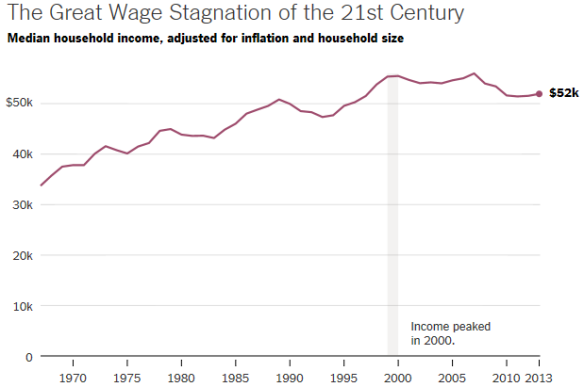 A column in today’s New York Times, “The Great Wage Slowdown, Looming over Politics,” by David Leonhardt, proposes a cut in the marginal tax rate for the middle class as a way of boosting their incomes.  As can be seen in the above chart, median household income has been flat since the year 2000, and even lower since the 2008 recession.  Mr. Leonhardt goes on to say that any tax cut for the middle class should be balanced by a tax increase for the wealthy.
It so happens that I proposed such a plan several months ago as a way of boosting the economy and reducing inequality at the same time. The idea is to enact broad-based tax reform whereby tax rates are lowered for all, offset by shrinking tax deductions.  The 64% of taxpayers who do not itemize deductions will receive a big tax cut.  But these are the very middle-class wage earners with stagnant incomes.  So they will likely spend their tax savings, thereby giving the economy a big boost.
More specifically: