Several months ago the Omaha World Herald reported that Nebraska has approximately 45,000 illegal immigrants, or about 2.5% of the state’s population.  Nebraska’s unemployment rate has now dropped to 3.4%, the third lowest in the nation behind only North Dakota and South Dakota.  Such a low unemployment rate represents a labor shortage.  There simply aren’t enough Nebraskans to perform all of the physically demanding, low skill work needed in the agriculture, meatpacking and construction industries.  It is this labor shortage which is attracting such a large number of illegal immigrants to Nebraska. 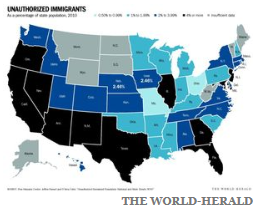 According to the New York Times, the Tea Party has recently changed its focus from “curtailing the reach of the federal government, cutting the deficit and countering the Wall Street wing of the Republican Party to becoming largely an anti-immigration overhaul movement.”  This is a very unfortunate development.
Why would it be so difficult to solve our illegal immigration problem in the following manner:

Once an adequate guest worker visa program has been set up and is operating efficiently, security on our southern border with Mexico would hardly be more of a problem than is security on our northern border with Canada. Illegal immigration should be considered as an economic problem, not a law-enforcement problem.
If it were handled correctly in this way, the problem would disappear in short order!