The Budget Committees for both the House of Representatives and the Senate have set a goal for balancing the federal budget over the next ten years.  As can be seen in the chart below, the two committees are in remarkably close agreement as to how this ambitious goal can be reached.  Once each chamber passes its own plan, then it will be up to a conference committee to produce a single unified plan. 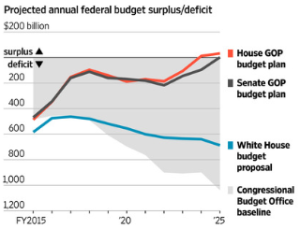 The roughly $5 trillion in savings needed to get this done represents 10% of the approximately $50 trillion otherwise projected to be spent in the next ten years.  This means that the entire federal budget, including both discretionary and mandatory (entitlements) spending, will have to be examined for savings:

With both the House and Senate giving high priority to setting up a ten year balanced budget plan, it is critical to seize this opportunity to address an unusually difficult problem.  The future security and prosperity of our country depends on it!