Last week, both the House and the Senate passed ten year budget plans which would bring the federal budget into balance by 2025.  I have devoted several recent blog posts to discussing these budget proposals and how they address our very serious debt and deficit problems. 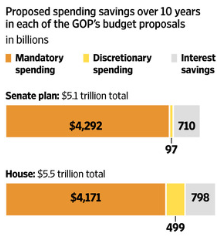 There are several important points to make:

Our country is in dire fiscal condition with large annual deficits projected indefinitely into the future, contributing to an exploding national debt.  It is heartening that our political system is responding to this threat to our future security and prosperity.  Let’s hope that House and Senate majorities continue to keep a sharp focus on the urgent task of fiscal restraint.