Republican presidential candidate Jeb Bush has just released his tax reform proposal, “My Tax Overhaul to Unleash 4% Growth.” It has many good features such as:

The lower individual and corporate tax rates, together with the separate investment and work incentives, will create a significant economic stimulus estimated to raise GDP by at least .5% per year or higher, depending you who ask.
According to the Tax Foundation, however, the plan would reduce federal revenue on a static basis by $3.66 trillion over ten years, and even by $1.6 trillion on a dynamic basis, taking into account the new tax revenue generated by the plan. 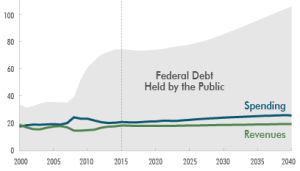 This is, of course, a huge problem. We badly need to speed up economic growth but we also need to lower, not increase, our annual deficit spending in order to put our debt on a downward path as a percentage of GDP.
The resolution of this quandary is to tighten up on those deductions, such as for mortgage interest, remaining in the code and also lessening the amount of the tax cuts if necessary in order to achieve overall revenue neutrality for the plan.