Ever since the end of World War II the strength of the United States has guaranteed world order and stability. As Americans we are especially fortunate to live in such a strong, free and prosperous nation.  But our future wellbeing depends on the soundness of our economy and the integrity of our financial system.   This includes being able to pay our country’s debts in any circumstances.
The public debt (on which we pay interest) is now 74% of GDP, the highest it has been since the end of WWII.  The Congressional Budget Office, our most objective and nonpartisan source for fiscal and budget information, predicts that the debt will continue to rise indefinitely, presumably until we have another financial crisis, which is likely to be much worse than the Great Recession of 2008-09. 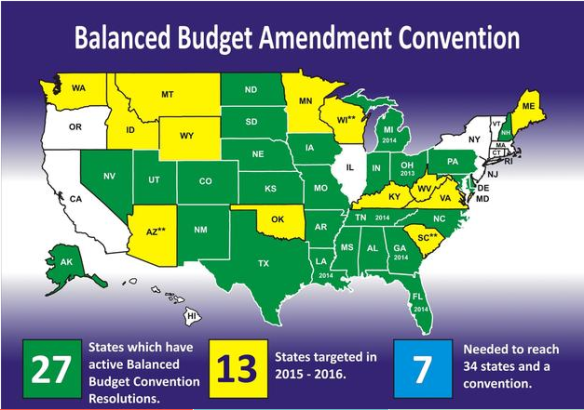 It is almost impossible for Congress to address our debt problem effectively.  Democrats want to spend more money while Republicans want to avoid raising taxes.  The wishes of both can be satisfied only by increasing deficit spending and therefore borrowing more money.  Right now this practice is pain free because interest rates are so low.
But this situation will not last forever and is, in fact, already starting to change.  The Federal Reserve raised short term interest rates by .25% in December 2015 which raises interest payments on the $13 trillion public debt by $33 billion per year.  Warding off inflation will require many more such rate increases in the future.
The only way to force Congress to act on this problem is with a Balanced Budget Amendment to the U.S. Constitution.  27 States (out of a required 34) have called for a Constitutional Convention to propose a BBA.  As more states are added to the list, Congress may decide to propose a BBA on its own.
I have discussed previously how to make a BBA both effective and flexible enough to handle emergencies.  It is likely that the proponents of a BBA would draft it carefully because it would have to be ratified by 38 states in order to take effect.
This is the best argument I can make for a BBA.  I will now move on to other topics!