From a reader of my blog:
I think he is too flawed, self-centered and sociopathic to accomplish much. I believe that tax reform will become tax cuts for the wealthy (no inheritance tax, etc.) and dealing with budget deficits will not happen. I know you think Trump will be contained by the conservative members of Congress. The Republicans seem unwilling to confront him or speak out as long as his base continues to be very loyal. I think he is so wounded now that it will be hard to accomplish much. 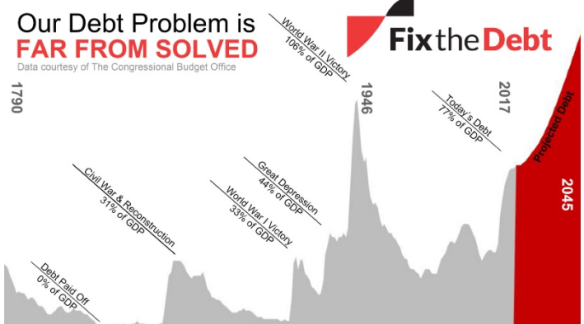 Granted that Donald Trump is hopelessly ensnared in controversy and incapable of changing his ways, he still has many opportunities to do something positive. For example regarding our extremely serious debt problem, he could focus on:

Conclusion. There is nothing easy about pursuing the above agenda. Implementing it will be highly controversial with lots of vociferous opposition.  It will take strong leadership to push it through.  But it represents a huge opportunity for a controversial president to do something worthwhile.