The House of Representatives, after much struggle, was finally able to pass a healthcare bill, The American Health Care Act.  Now it’s the Senate’s turn to pass its own version and it, too, is turning out to be a struggle. 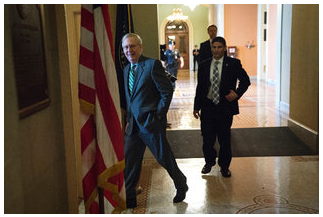 The healthcare policy expert, Avik Roy, considers the Senate bill to be a huge step forward:

Conclusion. There are certainly many imperfections in the Senate bill.  It does nothing to limit tax credits for employer-sponsored insurance.  This is sorely needed to put the overall cost of American healthcare on a sustainable course.  It does nothing to help low income people who struggle with high deductibles (for example, by helping to set up Health Savings Accounts). It also does nothing to rein in the cost of Medicare, such as by introducing means adjusted premiums and allowing Medicare to negotiate lower drug prices.
Nevertheless it is a huge step forward in controlling excessive healthcare costs as well as expanding health insurance coverage to more Americans in a fiscally responsible way.