“Solving inequality in earnest will require dramatic changes. … It will take vision, wisdom, creativity, patience, courage, and will to fully change our current inequalities.  But we can start with urgency in the business arena.  We can change the dynamic of our precarious current state.  We can change the dialogue and turn the crisis into a discussion of constructive possibilities.  With caring and compassion our attitudes will shift.  The good people will multiply and their efforts will be transformational.  Progress and success will beget more of the same.”

These are the closing words of retired CEO Peter Georgescu in his new book, “Capitalists, ARISE: end economic inequality, grow the middle class, heal the nation.”  According to Mr. Georgescu, this can all happen if business CEOs will stop worrying so much about the return on investment to their stockholders and instead give more concern to the welfare of their employees.

But it is not necessary for CEOs to act altruistically for these good things to happen.  In 2018 our economy grew at a rate of almost 3% and the unemployment rate is now down to 3.8%.  Such a low unemployment rate means we have a nationwide labor shortage!

In fact wages are now rising at a fairly rapid clip, faster than 3% per year (see second chart).    Many big companies, such as Amazon, Home Depot and Walmart, are individually raising their minimum wages in order to be able to attract the large numbers of workers they need to operate their businesses. 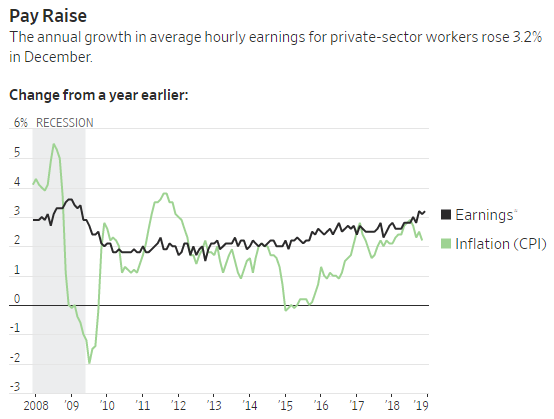 Summary.  In other words, the best way to achieve Mr. Georescu’s laudable goals, is to keep the unemployment rate as low as possible, at least under the 4% benchmark.  This will accomplish far more economic good for the average worker than acts of altruism by individual or groups of CEOs.  And by and large it is faster economic growth which lowers the unemployment rate.