Many political commentators have been complaining recently about the financial difficulties of the American middle class.  For example, a recent report from Bill Moyers and Company, “By the Numbers: The Incredibly Shrinking American Middle Class”, has a chart showing that the median middle class salary, adjusted for inflation, is now no better than it was in 1989 and not much higher than in 1979: 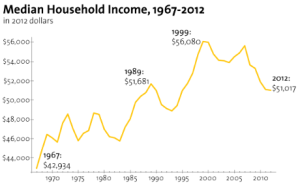 But there is another point of view, very well described by the two economists, Donald Boudreaux and Mark Perry, in the Wall Street Journal just about a year ago, “The Myth of a Stagnant Middle Class”.  They make several pertinent points:

Messrs. Boudreaux and Perry point out several other improvements in the quality of life which Americans enjoy:

Conclusion: We should stop complaining about inequality and thank our lucky stars for the free enterprise system which has been so successful in improving our quality of life.