Wall Street Journal columnist William Galston suggests in “Where Right and Left Agree on Inequality”, that both sides of the political spectrum agree that economic inequality is increasing in America and that government needs to address this problem.  “Poverty is part of the explanation, as liberals insist.  But so are parenting and family structure, as conservatives believe.” 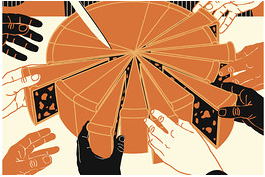 It so happens that we have a broadly supported federal program which simultaneously addresses both poverty and family structure.  It is the Earned Income Tax Credit program.  It provides $3,305 a year to low-income working families with one child and up to $6,143 for families with three or more children.  The U.S. spends $61 billion a year on this program and it has proven to be very successful in encouraging low-income people to find and keep jobs.  In fact, the economist, Gregory Mankiw, recommends the EITC over a higher minimum wage as a better way to increase the earnings of the working poor.
The New York Times’ Eduardo Porter reports in “Seeking Ways to Help the Poor and Childless”, that New York City is conducting an experiment to see if a locally run program similar to the EITC  will have the same positive effect in increasing employment of childless adults.  It is understood that many of the jobs being created in today’s economy are low paying service jobs.  As Mr. Porter says, “for the American market economy to remain viable, being employed must, one way or another, provide for workers’ needs.”
Conclusion:  as important as it is for Congress and the President to adopt measures to increase economic growth (e.g. tax reform, fiscal stability, expanded foreign trade, immigration reform), in order to create more and better paying jobs, government also has a responsibility to provide direct help to the needy who are trying to help themselves.  The EITC program is an excellent way to do this!