The subject of income inequality has generated much interest and concern in recent months.  Now we will also be hearing a lot about wealth inequality, based on the highly credible new work, “Capital in the Twenty-First Century” by the French economist, Thomas Piketty.  The New York Time’s Eduardo Porter, summarizes the basic message in his recent column “A Relentless Widening of Disparity in Wealth”, which is clearly displayed in the two charts below. 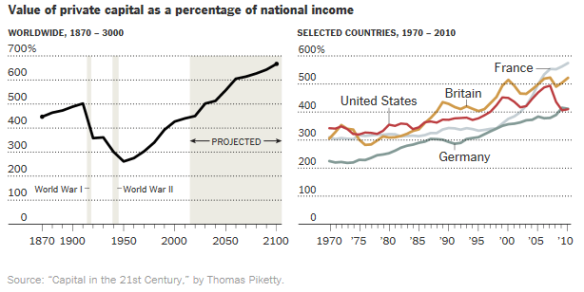 The value of private capital as a percentage of national income worldwide has been growing steadily since about 1950 and Mr. Piketty predicts that this trend will continue indefinitely.  The trend is equally true, not only in the U.S., but also in other developed countries as is illustrated in the chart.  It happens because the income from wealth, i.e. return on investment, typically grows faster than wages and GDP.
As Mr. Porter says, “It means future inequality in the United States will be driven by two forces.  First of all, a growing share of national income will go to the owners of capital.  Of the remaining labor income, a growing share will also go to the top executives and highly compensated stars at the pinnacle of the earnings scale.”
This trend has now been in effect ever since 1870, with the exception of the period between World War I and World War II, when a massive amount of wealth was destroyed.  The forces of globalization and growth of technology are contributing to both types of inequality, especially in the developed world (see my post of January 23), and these forces will almost surely continue unabated.  So the wealth and income inequality gaps are just going to keep getting worse.
How much inequality can exist in a democracy?  The number of losers (the low income, the poor, and even the struggling middle class) will gradually get bigger and bigger and will become more and more frustrated and express their discontent at the ballot box.  This threatens the future of capitalism and free enterprise, the economic principles on which our way of life is founded.
Something has to be done!  Stay tuned for my next post!

2 thoughts on “Wealth Inequality I. What Is It?”