A few days ago I made the argument that “we need a carbon tax” because global warming is real and our response to it should not be defaulted to regulatory action by the EPA and individual states acting on their own.  Just two days ago the U.S. Global Change Research Program released a voluminous new report, the “Third National Climate Assessment”, giving many examples of how dramatically global warming is already affecting life in the United States as well as all over the world. 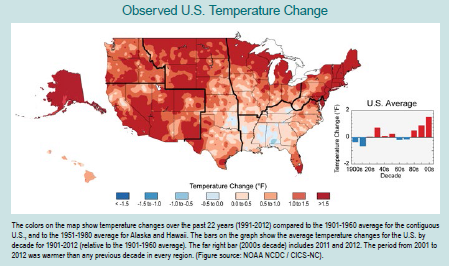 Perhaps the most direct effect in the U.S. is an increase in average temperatures of almost 2 degrees Fahrenheit since 1900.  This means that summers are longer and hotter and that winters are shorter and warmer, on average.  Hotter temperatures mean that there is more moisture in the atmosphere and rain comes in heavier downpours.

It is going to be harder and harder for doubters to deny the accumulating evidence.  Global average temperatures have also increased by almost 2 degrees F in the past century.  The most dramatic, and visible, evidence worldwide for climate change is the shrinking of the artic polar icecap measured each year in September.  Although the ice extent fluctuates from one year to another, the pattern of decline, as shown below, is clearly evident. 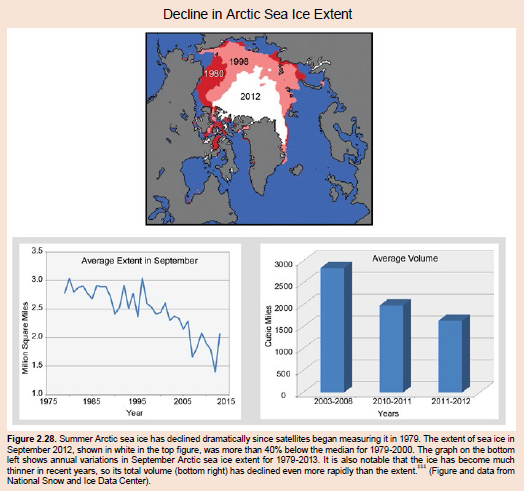 A worldwide response is urgently needed and the wealthiest country in the world should step up to the plate and lead the way.  A carbon tax does not mean an end to using to using fossil fuels but simply provides a strong incentive, without government picking winners and losers, to cut back on carbon emissions.  We can be confident that, with a strong economic incentive, American technology will figure out how to remove carbon from fossil fuels during combustion.
The sooner we begin a program along these lines, the better off we will all be in the very near future as the world continues to get warmer.

2 thoughts on “Why We Need a Carbon Tax II. The Scientific Evidence Is Very Strong”