Human civilization has made remarkable progress in the past two hundred years starting with the Industrial Revolution. This has been well documented in two current books, The Rational Optimist by Matt Ridley and Progress: ten reasons to look forward to the future by Johan Norberg.
But for human progress to continue indefinitely into the future depends on sufficient economic growth.  Faster growth means more progress.  The purpose of the Republican tax plan now working its way through Congress is to speed up economic growth in the U.S.
It is a legitimate question to ask whether there are environmental constraints on faster growth.  What are the world’s largest environmental problems and how serious are they?  In rough order of severity:

Conclusion. Yes, the world has environmental problems (mainly global warming) but no, they need not stand in the way of economic growth indefinitely into the future.

Congress has just voted to postpone the debt ceiling by three months until December 8. That’s okay; it’s just a tactic which also provides quick federal help for the damage caused by Hurricane Harvey.  The important thing is not to repeal the debt ceiling entirely.
As I have said before, global warming and national debt are both creeping catastrophes.  We ignore them at our great peril.  Right now hurricanes Harvey and Irma are reminding us of the huge devastation which can be caused by extreme weather events (which are made more likely by global warming).
In the same way, having an explicit debt ceiling reminds us at regular intervals that we have a very serious problem which will eventually catch up with us if we don’t take strong action to address it. 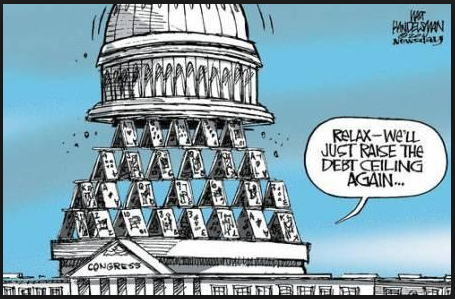 I know that I’m repeating myself but I can’t help it!

Conclusion.  Congress, the President and the American people need to be reminded often and loudly how serious the debt problem is.  Hopefully the message will eventually sink in.  The sooner the better!

In my last post I summarized the scientific evidence which convinces me that global warming is occurring and is primarily caused by the emission of carbon dioxide from the use of fossil fuels for energy production.
Several Face Book comments on my post suggest that there could be other causes such as a decrease in cloud cover over the earth, sunspot activity and even the carbon dioxide which is exhaled by the 7 billion (and growing number of) humans now alive on earth.  I am personally unable to evaluate the validity of these possible causes.  I rely on the overwhelming consensus of climate experts that the problem is caused by the burning of fossil fuels.

Perhaps the scariest evidence is the warming of the oceans and the related rising of sea levels by 1/8 of an inch per year (which is equivalent to a one foot rise per century). When I referred to the three recent catastrophic hurricanes of Katrina (2005), Sandy (2012) and now Harvey, several readers responded that there is no proof that the severity of these storms was caused by global warming.
I agree!  It is just that warmer oceans mean more evaporation and therefore more rainfall around the world.  This means that severe storms will become more likely as the oceans become warmer.

Take a look at the two charts from the current issue of The Economist.  They show that various types of natural disasters have been increasing in recent years and that record-breaking precipitation events are on the increase.
Conclusion. Global warming is already happening.  But we can act to keep it from getting worse.  More renewable energy (wind and solar) is only part of the answer.  The best way to cut back on carbon emissions is with a (revenue neutral) carbon tax.  This would be much more efficient than ad hoc regulations like the Clean Power Plan and ever higher auto gas mileage standards.

Global warming is a controversial issue and I would like to take as dispassionate a look at it as I possibly can. First, I will summarize what I consider to be the main evidence for global warming and then discuss what this means for public policy.

Here is the evidence as I see it:

Some of these phenomena may be beneficial such as more rainfall around the world and longer growing seasons. Less ice in the Arctic Ocean allows more summer navigation.  But rising sea levels will become catastrophic in low-lying coastal areas.

Conclusion. The above observational evidence for global warming is well established and hopefully non-controversial. The sources are scientific agencies whose integrity should be  beyond reproach. Once we accept the fact that global warming is for real and is caused by human activity, the question is what we should do about it.  This will be the topic of my next post.

Three devastating hurricanes have struck the U.S. in recent years: Katrina (2005), Sandy (2012) and now Harvey (2017). Hurricanes and tropical storms are natural events which have occurred since the distant past, long before global warming became a problem.
What has changed is that the oceans are now steadily getting warmer by absorbing much of the heat reflected back to earth by greenhouse gases (see chart).  Warmer water has more latent energy and this makes hurricanes more severe. The warmer the oceans become, the more devastating future hurricanes will be.

It is (past) time to get serious about global warming.  As the world’s strongest country, it is up to the U.S. to provide leadership on this very serious problem.  The best way we can respond is by adopting a (revenue neutral) carbon tax to discourage future carbon emissions as much as possible.  This problem is not going to disappear but it is within our power to limit the damage it causes before it gets a lot worse.
The exact same thing is true about our national debt.  At 77% of GDP (for the public part on which we pay interest), it is the highest it has been since the end of WWII. Right now interest rates are so low that our debt is almost “free money.”  But interest rates will eventually return to more historically normal levels.  When this happens, interest payments on the debt will rise by hundreds of billions of dollars per year.  At that point a severe Fiscal Crisis will not be far behind.
Again, debt is a solvable problem if only our national leaders will take it seriously.  All it requires (so to speak, because it won’t be easy!) is to limit future federal spending in sensible ways.

Conclusion. Both global warming and national debt are serious, urgent problems. The sooner we get started on addressing them, the better off we will be.

As I frequently remind my readers I am a fiscal conservative and a social moderate. I usually write about particular economic and fiscal problems facing our country.  But every now and then I like to step back and view our overall situation at one time.  The last time I did this was here.
Let’s take another look:

Conclusion. I am relatively optimistic that we can maintain good relations with China and will have the good sense to better control carbon emissions. But our debt problem is politically very difficult to address because it will require spending curtailments.  How do we successfully address such a huge problem?

As I have discussed previously, the evidence for global warming is overwhelming.  I had hoped that President Trump would publicly recognize this scientific reality and decide to stay in the Paris Climate Agreement.  Nevertheless, it will take more than three years for the U.S. to completely withdraw.
But in or out of the Paris Agreement, the best way for the U.S. to show leadership on this critical issue is to adopt a (revenue neutral) carbon tax.  The American Enterprise Institute has just issued a comprehensive report  on the desirability and feasibility of doing this. 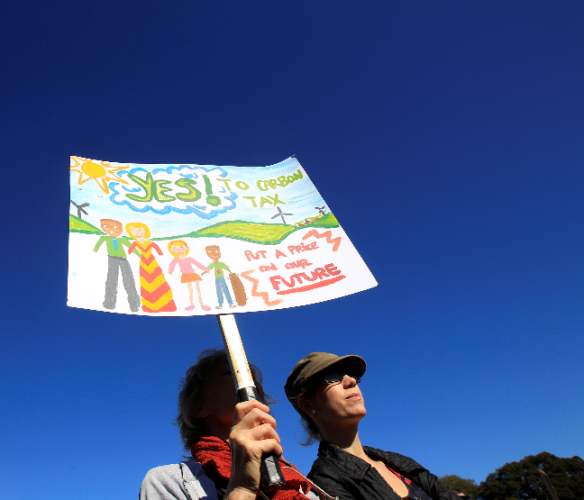 Here is the gist of the AEI argument:

Conclusion. For the U.S. to adopt a carbon tax would be an even stronger statement of world leadership than participating in the Paris Agreement.

The evidence for man-made global warming is now overwhelming. For example:

The three biggest carbon emitters in the world are China, the U.S. and India in that order. But what is also true, and not sufficiently well appreciated, is that carbon emissions in the U.S. are dropping while they are still increasing in China and India:

Coal use in the U.S. will continue to drop with or without enforcement of the Obama era Clean Power Plan because natural gas is now so plentiful and so much less expensive than coal. The best way for the U.S. to continue showing leadership in combatting global warming is for it to adopt a revenue-neutral carbon tax.  This would let the market sort out which type of energy is the cleanest and most efficient in meeting our country’s growing energy needs.  In fact a carbon tax might even be beneficial for the coal industry by creating a strong incentive to develop carbon capture and storage technology.
Conclusion. Most Americans now agree that global warming is real and that this presents a huge threat to human civilization.  It is likely that a revenue-neutral carbon tax will be adopted by our country in the near future.

The evidence for global warming is overwhelming and largely beyond dispute.  On the other hand, our industrialized world is highly dependent on the fossil fuels which produce it. This is what makes global warming such a hot political potato.

Yesterday the New York Times columnist Eduardo Porter described a carbon tax which has been implemented in British Columbia and has gained wide political acceptance.  Its general features are:

British Columbia’s experience shows that a carbon tax can work in practice. Here are a couple of reasons why such a tax should appeal to a broad political cross spectrum in the U.S.

Conclusion. The rapidly changing climate and weather patterns caused by global warming are a threat to human civilization. Reasonable measures can be taken to mitigate the effects with minimal economic disruption.  As the world’s strongest economy and leading superpower, the U.S. should be providing more leadership towards addressing this very serious problem.

One of my favorite economics journalists, Eduardo Porter, has a column which appears each Wednesday in The New York Times.  His column this week, “Imagining a World Without Growth,” shows that economic growth took off consistently around the world only about 200 years ago and that two things powered it: innovation and lots of carbon-based energy from fossil fuels.

The United Nations climate conference, meeting this week in Paris, is asking all countries to greatly cut back on their use of fossil fuels.  Mr. Porter, in an earlier column, described what severe cutbacks in fossil-fuel energy could look like:

Meeting the goal of limiting the average world-wide temperature increase to 2 degrees C will thus require a severe regimen of regulatory actions which will have negative economic consequences.  In fact it is difficult to image how such a strict regimen could ever be put in place or enforced without much public dissatisfaction.
We thus have two options for dealing with global warming.  We can ignore it at our peril or we can introduce a market mechanism to change people’s fundamental behavior and attitude about energy use.  What market mechanism?  A (revenue neutral) carbon tax, of course!  How else?