I am a candidate in the May 15 Nebraska Republican Primary for the U.S. Senate because the incumbent, Deb Fischer, is doing nothing about our enormous and out-of-control national debt. In fact, she has recently voted twice, for the new tax law and budget, to make our debt even worse than it already was. My last post quotes a reader of my blog as saying that deficit hawks need to make our soaring debt sound scary to ordinary citizens who don’t understand how it will affect their own lives.
The analyst Desmond Lachman from the American Enterprise Institute makes it sound even scarier by predicting a new 2008-2009 style crisis within the next year.  According to Mr. Lachman there are two basic reasons to fear another full-blown global economic crisis soon:

Conclusion. With a very high and rapidly growing national debt, along with unusually low interest rates which will be pushed up soon one way or another, we should prepare ourselves for another crisis in the near future.

Six years ago I was a candidate for the Republican nomination for Nebraska’s Second District Congressional seat. I lost in the May 2012 Primary.  After the November 2012 national election I began writing this blog It Does Not Add Up focused on fiscal and economic issues, mainly our large and rapidly growing national debt. I have now been blogging on this issue for over five years and the debt problem is just getting worse and worse.  Here is where we are right now:

Conclusion. Somehow or other we need to light a fire under enough members of Congress to persuade them to take our rapidly accumulating debt very seriously. Let me know (jackheidel@yahoo.com) if you are willing to work with me to do something along these lines!

As the readers of this blog know very well, I am so upset about our rapidly increasing national debt that I am preparing (in just a few days) to enter the 2018 Nebraska Republican Primary for U.S. Senate against the incumbent Deb Fischer because she just voted (with the new tax law) to increase our debt by $1 trillion over the next decade.  Of course, so did all of the other 52 Republican Senators as well but she is up for reelection this year and I live in her state.
The analyst Desmond Lachman from the American Enterprise Institute has a cogent summary of why increasing our debt at this time is such a bad idea:

Conclusion. By raising our debt by $1 trillion, the new Republican tax law is appallingly short-sited policy. I hope to make Senator Fischer pay a political price by her bad judgment in voting for it.

Not only is Washington politics already hyper-partisan, but both parties are continuing to move to even greater extremes, see here and here.
Here are two examples of extreme positions now being espoused by major elements of one or the other of the two parties:

Conclusion. The U.S. badly needs a more cost efficient healthcare system and a simpler and more efficient tax system. But there are right ways and wrong ways to do both of these things.  Single payer healthcare and (unpaid for) tax rate cuts are the wrong way to proceed.  In each case, no action at all is much better than getting it wrong.

Income inequality is a hot political issue today and I have frequently discussed it on this blog.  In particular, the chart just below shows that income inequality is only slightly worse since 1979, after government transfers and federal taxes are taken into account.

The AEI scholar, Mark Perry, has analyzed the 2016 annual report from the Census Bureau on “Income and Poverty in the United States” and points out the very strong correlation between income inequality and household demographics.

As I have discussed previously, the evidence for global warming is overwhelming.  I had hoped that President Trump would publicly recognize this scientific reality and decide to stay in the Paris Climate Agreement.  Nevertheless, it will take more than three years for the U.S. to completely withdraw.
But in or out of the Paris Agreement, the best way for the U.S. to show leadership on this critical issue is to adopt a (revenue neutral) carbon tax.  The American Enterprise Institute has just issued a comprehensive report  on the desirability and feasibility of doing this.

Here is the gist of the AEI argument:

Conclusion. For the U.S. to adopt a carbon tax would be an even stronger statement of world leadership than participating in the Paris Agreement.

The Affordable Care Act expands healthcare access in the U.S. but does nothing to control its costs. With its current majorities in Congress as well as holding the presidency, the GOP now owns the healthcare insurance crisis.  If the GOP doesn’t get it fixed right, it is almost inevitable that we’ll eventually end up with a single-payer system such as universal Medicare. 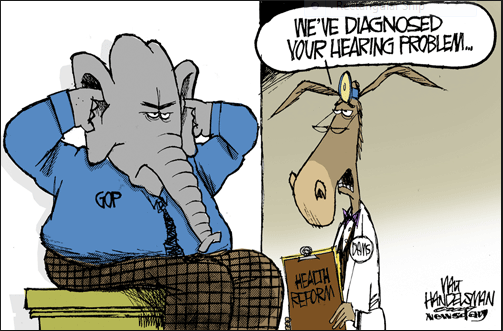 I have previously discussed one good way to fix the bill recently passed by the Republican House of Representatives.  But today I will take a more general approach proposed by Thomas Miller from the American Enterprise Institute.  Mr. Miller says that a replacement for the ACA should emphasize:

General principles such as these will end both the individual and employer mandates and allow average Americans a greater choice in how they want to spend their resources to protect and enhance their health.

Conclusion. The ACA has taken us closer to the goal of universal healthcare for all Americans and there can be no retreat from this standard. But much better cost control can be achieved and this is what fixing the ACA should focus on.  A free market system for healthcare will work if it is set up in a fair and responsible manner.

Donald Trump was elected President because of strong support from blue-collar workers in the battleground states such as Wisconsin, Michigan, Pennsylvania and Ohio. The American Enterprise Institute scholar, Nicholas Eberstadt, has explained clearly why this happened.  It is largely a result of a slowdown in economic growth in recent years which has hit blue-collar workers especially hard.

Can this recent slow growth trend be reversed?  The economist, Edward Lazear, has a positive answer to this question in today’s Wall Street Journal.  According to Mr. Lazear:

Conclusion. There is clearly much that can be done to speed up both labor productivity and the number of hours worked by Americans. President Trump and the Republican Congress have a good shot at increasing economic growth to 3% annually.

The American Enterprise Institute’s Nicholas Eberstadt has performed a valuable national service with two recent publications: “Men without Work” and “Our Miserable 21st Century”  These works lay out in great detail what has gone wrong in our country in the past 16 years:

Conclusion. For the future prosperity and social cohesion of our country addressing this problem should be a very high priority. Let’s hope that President Trump gets the message.

Everyone is trying to figure out what Donald Trump is all about and I am no exception. My last two posts, here and here, compare his positives and negatives and what he is doing well so far and also not so well.
The American Enterprise Institute’s political economist, Nicholas Eberstadt, has an article in the current issue of Commentary, “Our Miserable 21st Century,” describing very cogently the economic and social conditions which have led to the election of Donald Trump as President of the United States. Says Mr. Eberstadt:

Concludes Mr. Eberstadt, “The abstraction of inequality doesn’t matter a lot to ordinary Americans. The reality of economic insecurity does.  The Great American Escalator is broken – and it badly needs to be fixed.  With the election of 2016, Americans within the bubble (of affluence) finally learned that the 21st century has gotten off to a very bad start in America.  Welcome to the reality.  We have a lot of work to do together to turn this around.”

Join 2,231 other followers
It Does Not Add Up
Blog at WordPress.com.
Loading Comments...