Three devastating hurricanes have struck the U.S. in recent years: Katrina (2005), Sandy (2012) and now Harvey (2017). Hurricanes and tropical storms are natural events which have occurred since the distant past, long before global warming became a problem.
What has changed is that the oceans are now steadily getting warmer by absorbing much of the heat reflected back to earth by greenhouse gases (see chart).  Warmer water has more latent energy and this makes hurricanes more severe. The warmer the oceans become, the more devastating future hurricanes will be. 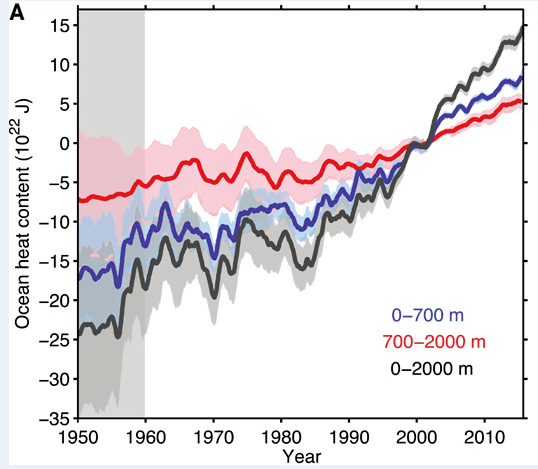 It is (past) time to get serious about global warming.  As the world’s strongest country, it is up to the U.S. to provide leadership on this very serious problem.  The best way we can respond is by adopting a (revenue neutral) carbon tax to discourage future carbon emissions as much as possible.  This problem is not going to disappear but it is within our power to limit the damage it causes before it gets a lot worse.
The exact same thing is true about our national debt.  At 77% of GDP (for the public part on which we pay interest), it is the highest it has been since the end of WWII. Right now interest rates are so low that our debt is almost “free money.”  But interest rates will eventually return to more historically normal levels.  When this happens, interest payments on the debt will rise by hundreds of billions of dollars per year.  At that point a severe Fiscal Crisis will not be far behind.
Again, debt is a solvable problem if only our national leaders will take it seriously.  All it requires (so to speak, because it won’t be easy!) is to limit future federal spending in sensible ways.

Conclusion. Both global warming and national debt are serious, urgent problems. The sooner we get started on addressing them, the better off we will be.