As reported in today’s New York Times, ”Personal Tack by Obama in an Effort to Aid Parents”, the President held an all-day conference yesterday for working families, saying that 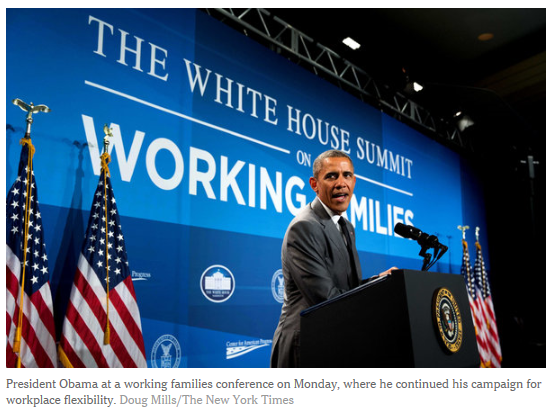 The economic journalist, Robert Samuelson, pointed out in the Washington Post a few days ago, ”The Jobs Mystery”, that even though our unemployment rate has now dropped to 6.3%, there are still 9.8 million officially unemployed people, plus an additional 7 million who would like a job but are not looking.  There are also 7.3 million part-time workers who would like longer hours.  This gives a really quite shocking total of 24.1 million unemployed or underemployed workers.
Granted we had a bad recession which was not the President’s fault, but it ended in June 2009, a full five years ago.  In the meantime his administration has done much to retard economic growth (passing ObamaCare and the Dodd-Frank Act) and little, besides huge deficit spending, to boost it.  He and the Democratic Party should be held responsible for this neglect and they probably will be.
One thing which would do a lot to boost economic growth is apparently contrary to liberal ideology and therefore off the discussion table.  I am referring to fundamental, broad-based tax reform whereby individual tax rates would be lowered across the board, but in a revenue neutral manner, by closing or greatly shrinking the loopholes and deductions which primarily benefit the wealthy.  The two-thirds of Americans who do not itemize their tax deductions would get a big boost in take home pay.  Since they are primarily middle and lower income workers whose wages have been stagnant since the recession began, they will tend to spend this extra income, thereby giving the economy a big boost.
If the President were to sincerely ask the House Republican leadership to work with the Democratic Party to boost economic growth, something along this line could be acted upon.  This is the way to really aid families.  Why doesn’t he do it?