The Harvard Business School has just conducted its third alumni survey on U.S. competitiveness and finds “An Economy Doing Half Its Job.”  “Our report on the findings focuses on a troubling divergence in the American economy: large and midsize firms have rallied strongly from the Great Recession, and highly skilled individuals are prospering.  But middle- and working-class citizens are struggling, as are small businesses.  We argue that such a divergence is unsustainable.” 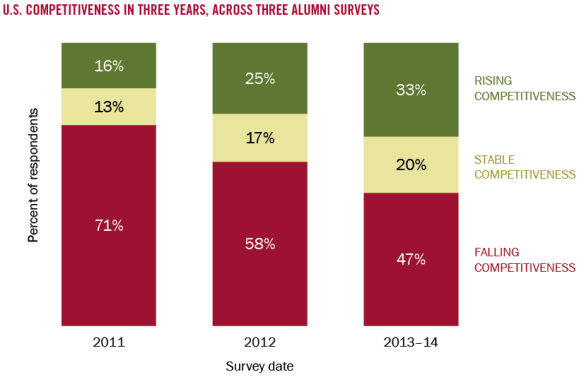 Highlights of the survey are:

The authors of the report “see a need for business leaders to move toward strategic, collaborative efforts that make the average American productive enough to command higher wages even in competitive global labor markets.  Without such actions, the U.S. economy will continue to do only half its job, with many citizens struggling.” What’s interesting about this report is that it describes the problems of the American economy in a straightforward and practical way with no apparent ideological slant.  Of course, addressing these issues requires political action with all of its messy, partisan overtones. Nevertheless perhaps all parties can at least agree on what the basic problem is.