As we celebrate the 239th anniversary of the signing of the Declaration of Independence in 1776, Americans have much to be thankful for.  It is often said that the United States is the strongest, wealthiest and freest country the world has ever known.  Although this may be somewhat of an exaggeration (see below), it is still indicative of how fortunate we are compared to the rest of the world. 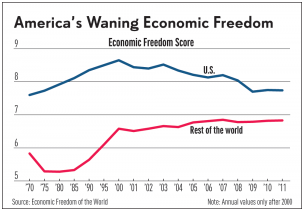 As we celebrate our good fortune, we need to be acutely aware that our continued success as a great nation is not automatically assured.  In fact we face a number of troubling and persistent problems which are not likely to disappear unless we take strong action to address them.  For example we have:

As the strongest nation in the world we have much responsibility for continued world peace and prosperity.  We can’t fulfill this role adequately unless our own internal fiscal and economic policies are in fundamentally sound shape.
Let’s be thankful for what we have and bear down hard to insure that we keep it!