We are currently living in a high risk fiscal bubble. Low interest rates mean that our enormous and rapidly growing national debt is virtually “free” money.  When interest rates return to historically normal (much higher) levels, interest payments on the debt will explode putting us in a precarious fiscal situation.
As I have pointed out in the last few posts, it is the cost of entitlements and, in particular, health care entitlements, i.e. Medicare and Medicaid, which is driving our debt problem. The most effective way to control these entitlement costs is to control overall health care costs by insisting that all of us have more “skin in the game,” meaning that we must pay more of our health care costs directly from our own pockets as opposed to having them paid by third party insurance companies. 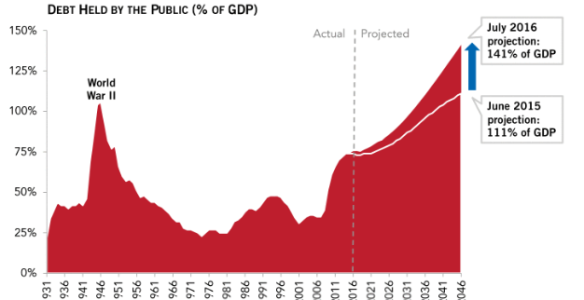 The latest report from the Congressional Budget Office, just a few days ago, shows that our debt problem is even worse than was projected just a year ago (see above). 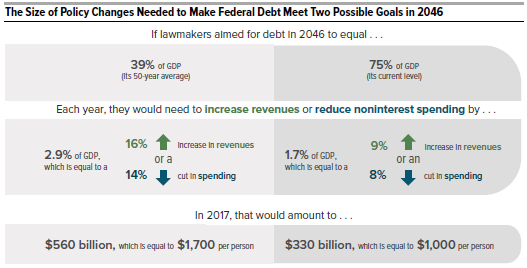 The second chart (just above) shows the magnitude of the effort it will take to get our debt under control.  Just to stabilize the debt, i.e. to keep it from getting any worse than it is right now, will require a combination of spending cuts and/or revenue increases of 1.7% of GDP which amounts to $330 billion in 2016 dollars.
Conclusion. We have a huge national debt problem which is only going to keep getting worse until we make somewhat painful changes in federal policy.  We have to either restrain spending increases and/or increase taxes by significant amounts.  Health care entitlements are the biggest problem area and Medicare is worst of all.
Our two presumptive presidential candidates, Hillary Clinton and Donald Trump, are completely ignoring this grave problem.  And indeed their proposed policy initiatives will only make it worse!
Do we have the strength to deal with this dire problem short of another crisis?

2 thoughts on “Our Dire Fiscal Situation: A Summary”