The recent announcement by Aetna Insurance Company that it will exit the health insurance market in most of the states where it now operates raises a fundamental question about the stability of the Affordable Care Act. As shown by the following map  from yesterday’s New York Times, it appears that at least five states with 17% of the American population will have only one health insurer to choose from next year. 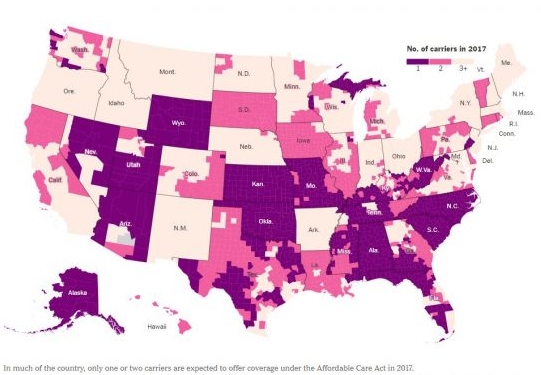 As the Wall Street Journal’s Greg Ip points out in a recent article, “the problem isn’t technical or temporary, it is intrinsic to how the law was written”  Specifically:

I have pointed out many times that the cost of health care, especially for the entitlement programs of Medicare and Medicaid, is the fundamental driver of our exploding national debt and therefore must be curtailed.  But now, in addition to the cost problem, we are discovering that the ACA also has a fundamental access problem as well. Big changes are clearly needed in the ACA.  More details later!