Straightening out healthcare insurance is a high priority for the new Trump Administration and Congress as it should be. The U.S. spends 18% of GDP on healthcare, public and private, twice as much as any other developed country and this percentage is likely to keep on increasing without major changes. 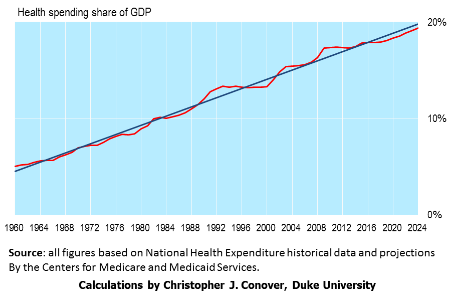 Republican thought is converging, see here and here, on a plan with these broad features:

Conclusion. Such a plan will insure coverage for all Americans who want it. The high deductibility feature, coupled with HSAs, will strongly encourage healthcare consumers to shop around for the best price on routine care.  Such price consciousness by consumers is the only way (short of a single payer system with severe rationing) to get our national healthcare costs under control.
A modification of such a plan, proposed by Senator Bill Cassidy (R, LA) and Senator Susan Collins (R, ME) would give each state the choice of either keeping the ACA or replacing it with a version of the above plan.  This is a poor idea because the ACA has no cost control and this is what is sorely needed.  In other words, the above plan should be made universal, identical for all states.  Let the states provide and pay for supplemental coverage if they wish.

2 thoughts on “Fixing Obamacare: Keep it Simple and Low Cost”