America has some serious problems right now.  We are in the midst of a coronavirus pandemic which has caused a severe recession and high unemployment rate.  The brutal killing of George Floyd by a Minneapolis police officer has led to a nationwide outbreak of racial protests.  Although I believe that America is a great nation, and constantly getting better, I understand that many people have a different point of view. 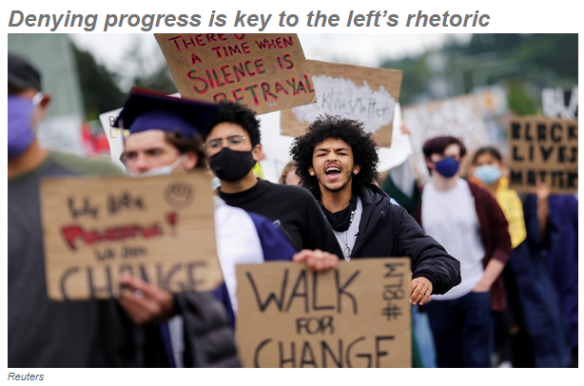 I have just come across an excellent essay, “Denying Progress is Key to the Left’s Rhetoric,” by Robert Doar from the American Enterprise Institute.  He points out that:

Why are the radicals so effective at making it sound like all this progress is not true?  The answer to this question is one word: equality.  The equality promised by the Declaration of Independence and the Constitution is about equal treatment under the law, not equal outcomes in all aspects of life.  Individual outcomes in educational attainment, income, housing, and wealth still depend on individual effort and work.  The radical left is asking for far more than our limited system of government can, or should even try, to deliver.

Conclusion: The contest for the future of our country will be waged on this ground.  Our system of limited government is suited to achieve the goals of civil rights under law and the elimination of severe material hardship.  We have made huge progress in accomplishing these goals and will continue to do even more in the future.
Our system of government is not capable of producing guaranteed middle-class income for all, because this depends on individual effort.