My last post, “Racism and Black Progress,” pointed out that, despite all of the racial tension in our society, especially bad at the present time, blacks have made much social and economic progress over the past half century.  All Americans of good will want this progress to continue.
I live in Omaha NE and am personally involved in a very promising public initiative to improve educational outcomes in inner city schools.  It is called the Learning Community and is an Omaha metro-wide effort to close the academic achievement gap between children from low-income families and those from the middle class.

The above chart shows clearly what the problem is.  Already in third grade FRL (free and reduced priced lunch) kids are behind on the NeSA (Nebraska State Assessment) reading test.  The gap persists into middle school and then gets much worse in high school.

A recent article in the Omaha World Herald reports that while black students make up 25% of Omaha Public Schools enrollment, they are responsible for 55% of disciplinary incidents.  Obviously, disruptive students are not learning what they need to know to succeed in school and in life.
A promising solution to this very difficult problem of improving educational outcomes for inner city students is early childhood education to prepare these kids to succeed in Kindergarten and then stay in school until graduation.  This is in fact the approach being taken by Omaha’s Learning Community.  But it is clearly a long range program which will take many years to show success.
Conclusion. A solid basic education is essential for success in today’s highly complex society.  Blacks will never reach full social and economic equality with whites until they achieve better educational outcomes.  Early childhood education has much promise in closing the academic achievement gap but will take many years to show significant progress.

A story in the World Herald on December 19, “OPS board preparing for charter school bills,” reports that several members of the OPS School Board expect charter school legislation to be introduced into the Nebraska Legislature next year, and want to be in a position to influence it.   According to proponents, charter schools provide more choice for families who are dissatisfied with their own neighborhood school.
In debating this issue, it is important to keep in mind that the Learning Community already provides expanded educational choice in the metro Omaha area.  In 2013-2014, 6,535 students, of whom 42% were eligible for Free and Reduced Lunch support, participated in the LC’s Open Enrollment program which allows great latitude in transferring into a different school district as long as space is available.  FRL eligible students are provided free transportation for these transfers, at a cost of $5.4 million last year. 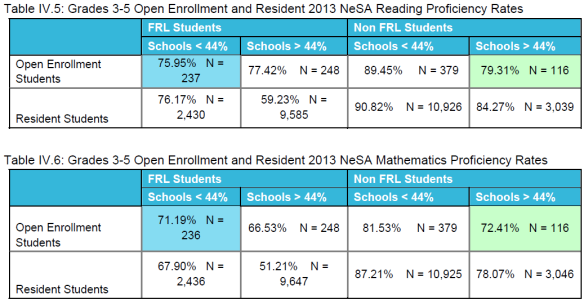 The above charts from the 2012-2013 LC Annual Report demonstrate very clearly the academic benefit provided by the Open Enrollment program.  For example, the 237 FRL students who transferred into low FRL elementary schools scored as high in reading proficiency as the resident students.  The 248 FRL students who transferred into high FRL elementary schools scored much higher in reading proficiency than the resident students.  Similar results are true for mathematics although the proficiency numbers are lower.
The LC staff believes (see the 2013-2014 Annual Report) that the number of FRL students participating in open enrollment is too small to have an appreciable difference on closing the profound socio-economic achievement gap which exists in the Learning Community.  However, the Open Enrollment program is still valuable as a safety valve for families who are looking for a different school environment.
Consider all of the educational choice which already exists for OPS students: many magnet programs, the Wilson Focus School in south Omaha, the Seventy-Five North partnership proposed for Howard Kennedy Elementary School, and the new privately funded Nelson Mandela Elementary School opening in Fall 2015.
On top of all this is the LC’s Open Enrollment program for any low-income student to transfer to a different school district with free transportation provided.
Nebraska does not need Charter Schools for the very simple reason that huge educational choice already exists where it is most needed, namely within the high poverty Omaha Public School District.

The “Learning Community” represents an experiment being conducted in Omaha, Nebraska, where I live, to determine whether the entire metro area can work together to close, or at least narrow, the academic achievement gap between low-income and middle class students. The extent of the problem is clearly demonstrated by the chart below which shows that starting in elementary school reading proficiency is lower for low-income students and this “gap” continues to get worse in middle school and then gets much worse in high school.  Not surprisingly, the same problem exists throughout the entire state of Nebraska to only a slightly lesser degree.

Now, six years after the establishment of the Learning Community by the Nebraska Legislature, the superintendents of the 11 LC school districts are putting together a comprehensive report on its operation.  There have been repeated complaints about the fairness of the LC’s common property tax levy because it has created many more losers than winners among the 11 districts.  There have also been questions raised about the costs and efficacy of the “open enrollment” facet of the plan whereby low-income students can transfer to an adjoining district and receive free transportation.  It is useful for the superintendents to address these issues in an organized manner.
What will be difficult, of course, is for all eleven school boards to come together in agreement on a final report to the legislature.  The Omaha World Herald reports today  on how that process is going. The superintendents are actually very positive about a new program for early childhood education as well as other elementary learning center programs housed primarily in North and South Omaha.
One superintendent has suggested to his Board that they might want to tell lawmakers that the Learning Community should be declared a “failed experiment” and dissolved.  But given the enormity of the achievement gap, as discussed above, it is unlikely that a majority of the K-12 educational leadership in Omaha will support such a negative recommendation.
The U.S. must figure out how to do a better job of educating children from low-income families and Omaha’s Learning Community is making significant progress in addressing this very critical national problem.

The New York Times recently compiled a map rating each of the 3,135 counties in the U.S. according to the following six factors:  educational attainment, median household income, unemployment rate, disability rate, life expectancy and obesity.  As can be seen (below) the whole state of Nebraska (motto: the Good Life) comes out very well in this rating scheme. 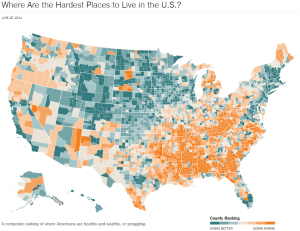 On the other hand, Omaha has the highest black child poverty rate in the country at 59.4% (Omaha World Herald (4/15/2007)).  Partly for this reason the Nebraska Legislature established the Learning Community of Douglas and Sarpy Counties in 2008 whose purpose is to close the academic achievement gap between middle class and low-income students in the Omaha metro area.
Just a few days ago the Learning Community Coordinating Council approved an early childhood education plan developed by the Superintendents of the 11 Omaha area school districts to help children in poverty in the metro area.  It will cost about $2.5 million per year and will fund 29.5 full-time equivalent positions.  The plan will be managed by the newly established Buffett Early Childhood Institute in Omaha.  The increase in the property tax throughout the two county area to support this program will amount to $5 per year for the owner of a $100,000 house.
It is quite appropriate for an overall wealthy community like Omaha in a very well off state like Nebraska to pitch in, in this way, to help out its less fortunate residents.  It represents an example of how state and local governments can and should step in and take more responsibility for addressing their own problems without help from the federal government which is broke and needs to cut back on what it does.
If the Early Childhood Education plan lives up to its high expectations (as I believe it will), it is likely to receive much national attention and will become a model for other parts of the country.  Nebraskans should be proud of supporting such a forward looking initiative!