The French economist Thomas Piketty is creating a huge stir with the publication in English of his new book “Capital in the 21st Century.”  Mr. Piketty develops a very simple idea, with reams and reams of data.  Namely that income from wealth, i.e. investment income, typically grows faster than income from wages and GDP.  This means that the value of private capital is growing steadily as a percentage of national income.  This trend has been occurring ever since 1950, at the end of WWII, and is likely to continue indefinitely absent new mega shocks to the global economy such as another world war. 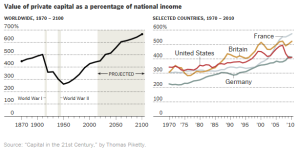 In other words, wealth inequality is rapidly increasing just as is income inequality.  Today’s New York Times has an interesting article “Taking on Adam Smith (and Karl Marx)”  discussing Mr. Piketty’s background and how it has influenced his research.  “No revolutionary, Mr. Piketty says that inequality by itself is acceptable to the extent it spurs individual initiative and the generation of wealth.  But extreme economic inequality, he contends, will have a deep and deleterious impact on democratic values,” says the reporter.
Now that income inequality and wealth inequality are clearly well documented, the question is how our democratic society will respond through the political process.  First of all, we need to agree to take the problem seriously.  Equality of opportunity and economic mobility still exist but it is getting harder and harder to move up the income ladder. What our country badly needs right now is an economic program that will get our economy growing faster in order to create more jobs as well as bringing in more tax revenue to pay for government.
One way to accomplish this is with

Such a wealth tax would be a highly visible means of addressing economic inequality in a way which would greatly benefit to the economy at the same time.