My last post “Raising America’s Pay” addresses a new report from the Economic Policy Institute, “Raising America’s Pay: Why It’s Our Central Economic Policy Challenge”.  Its starting point is the now generally accepted view that wages for the typical American worker have been flat ever since the early 1970s even though labor productivity has continued to rise steadily.
The EPI authors recognize that globalization and the growth of technology have contributed to wage stagnation even though they blame malign policy decisions as well.  I do agree with them that the resulting increase in economic inequality is detrimental to America.  I also agree with them that the way to address inequality is for wages to go up. The best way to accomplish this is to lower unemployment by increasing economic growth.  This will happen when large numbers of consumers start spending more money, thereby increasing demand.  Does this sound like a vicious circle?  It need not be! 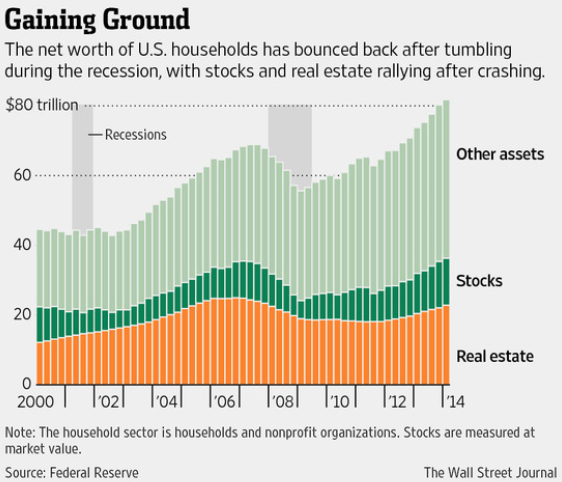 The above chart from the Wall Street Journal shows that the net worth of U.S. households has now more than recovered from the Great Recession.  The problem is that most of this new wealth has gone to the people with the highest incomes who are more likely to save it.  What we need to do is “redistribute” (gasp!) some of this vast sum of new wealth back to middle and lower income people who would be much more likely to spend it.
There is a straightforward way to do this.  Broad based tax reform!  Lower everyone’s tax rates paid for by closing loopholes and shrinking deductions which primarily benefit the wealthy.  This will be a pure gain in income for the two thirds of Americans, about 80 million, who pay income taxes but do not itemize deductions, most of whom are in the lower and middle income brackets.  These people are likely to spend most of their new income, thus giving the economy the big boost that it needs!
Our leaders in Washington should be able to figure this out!