Several large U.S. companies have recently announced that they are planning to merge with foreign companies and move their corporate headquarters to a low tax country such as Ireland or Great Britain.  The Obama Administration proposes to disallow such “tax inversions” by requiring that after such a merger at least 50% of the stock of the new company would have to be foreign owned.  Otherwise the firm would still be considered American for tax purposes.  Such a technical fix is unlikely to solve a much more fundamental problem.
As the latest issue of the Economist, “How to stop the inversion perversion,” makes clear, “America’s corporate tax has two horrible flaws.  The first is the tax rate, which at 35% is the highest among the 34 mostly rich-country members of the OECD. … The second flaw is that America levies tax on a company’s income no matter where in the world it is earned.  In contrast, every other large rich country taxes only income earned within its borders (a so-called ‘territorial system’).  Here, too, America’s system is absurdly ineffective at collecting money.  Firms do not have to pay tax on foreign profits until they bring them back home.  Not surprisingly, many do not: American multinationals have some $2 trillion sitting on their foreign units’ balance sheets.” 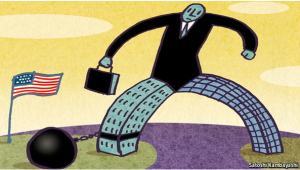 A relatively simple solution to this glaring problem would be to lower the corporate tax rate to 25%, the OECD average, and shift to a territorial system.  Revenue losses would be offset by closing loopholes and deductions.
A better, but likely more controversial, solution would be to completely eliminate the corporate income tax and then tax dividends and capital gains at the same rate as earned income.  This would avoid the double taxation problem whereby profits are taxed first at the corporate level and then again for individuals as dividends and capital gains.
The overall goal in this entire endeavor should be to boost the economy, thereby creating more jobs, and additionally to raise the tax revenue needed to pay our bills.  Fairness is important but growth is even more important!