My last post emphsizes that any solution to our nation’s long term debt problem must include reining in the cost of American healthcare.  There are two major drivers to this problem as is made clear by a new report from the American Enterprise Institute, “Improving Health and Health Care: An Agenda for Reform.”

First of all, out-of-pocket consumer spending on healthcare has been steadily declining for many years. The less we pay directly for our own healthcare, the less incentive we have to control costs. 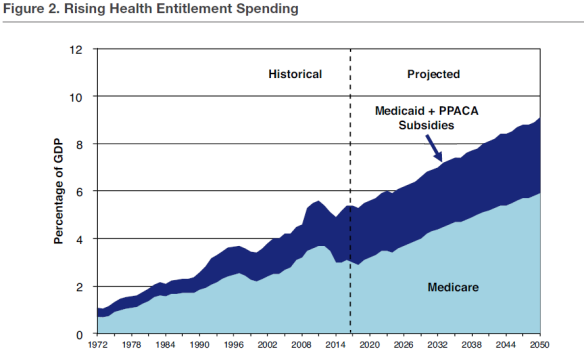 Secondly, the cost of healthcare entitlement spending, for Medicare and Medicaid , is growing rapidly as a percentage of GDP.  Such a rapid increase is unsustainable and must be curtailed. Here is what the AEI report recommends for doing this.

Such reforms as these can significantly lower the cost of providing healthcare to the poor, the elderly and everyone else as well. If we don’t do something along these lines, we will eventually end up with a government run single payer system much to our detriment.

2 thoughts on “Lowering the Cost of American Healthcare II. Entitlements”