As the presidential election tightens and the likely margin of victory for either candidate continues to shrink, it becomes ever more apparent that we need a bipartisan approach to solving our most basic problems.  My last post discusses the need for fundamental tax reform to get our economy growing faster to create more and better paying jobs.  Today I remind my readers of the need for better fiscal policies as well to address our massive and steadily deteriorating debt problem.
As the American Enterprise Institute,  among many other think tanks, makes abundantly clear, we are spending more and more of our federal budget on entitlements  as opposed to all of the many other federal responsibilities which are lumped together as discretionary spending.  In other words, the only way to fix our deficit and debt problems is to achieve better control over entitlement spending. 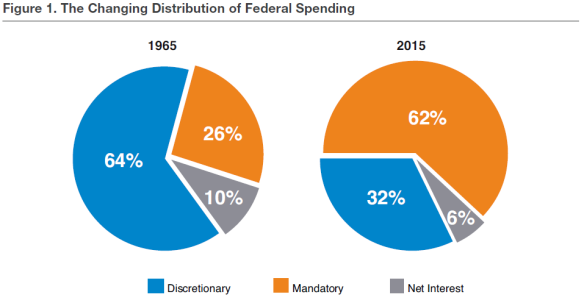 AEI has some excellent ideas on how to do this:

Conclusion. It should be emphasized as strongly as possible that the purpose of entitlement reform is to preserve and strengthen entitlements, not to weaken or destroy them.  Without such action we are headed for a much worse financial crisis than the one we had in 2008-2009 which will put all government social programs at risk.