The Atlantic magazine has just released a remarkable essay written by the political commentator, David Frum, entitled, “How to Build an Autocracy.”  Says Mr. Frum, “Donald Trump will not set out to build an authoritarian state.  His immediate priority seems likely to be to use the presidency to enrich himself.  But as he does so, he will need to protect himself from legal risk.  Being Trump, he will also inevitably wish to inflict payback on his critics.  Construction of an apparatus of impunity and revenge will begin haphazardly and opportunistically.  But it will accelerate.  It will have to.” 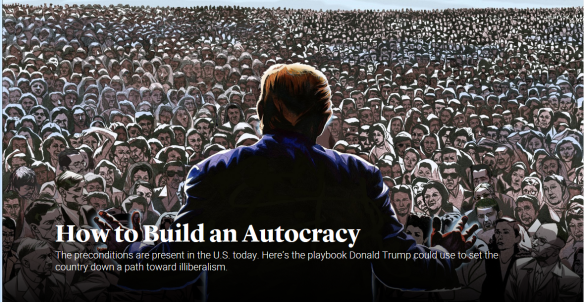 Let’s assume that Mr. Frum is correct that Trump’s top priority is to enrich himself.  What will stop him from doing this?  A recent column in the New York Times points out that:

But there are other constraints on what he does in office:

Conclusion. Just because Republicans are tolerant of Mr. Trump’s personal behavior does not mean he can successfully ignore the strong Republican desire for fiscal restraint.

4 thoughts on “What, if Anything, Will Restrain Donald Trump?”