The Atlantic monthly magazine is celebrating its 160th anniversary this year.  In 1857 its founders envisioned that the magazine would “honestly endeavor to be the exponent of what its conductors believe to be the American idea.”  In the current issue one of its writers asks, “Is the American Idea Doomed?” and claims that it has few supporters on either the left or the right.  Well, I happen to be in the middle and I think the American idea is doing very well indeed.

Conclusion. “The democratic experiment is fragile” (perhaps!) but it’s also got a lot going for it right now. We can never afford to be complacent but we need not be pessimistic either.

One hundred years ago, in 1917, President Woodrow Wilson asked Congress to declare war on Germany “to make the world safe for democracy.”  Pax Americana, the relative peace and stability which has lasted since the end of WWII, is due to the overwhelming economic and military strength of the United States.
The Chinese population at 1.3 billion is four times as large as the U.S. population.  Its economy is growing much faster than ours and will surpass ours in 10 or 15 years.  There is little, if anything, the U.S. can do to prevent this from happening.

China is a non-free, non-democratic, totalitarian state.  We hope that it will remain peaceful towards the U.S. as its economic strength, and eventually also its military strength, surpasses our own, but it would be risky to assume this for sure.
What then should we do to prepare for the day when we are no longer the dominant power on earth?  In my opinion, our best preparation for this inevitable day is to make democracy as strong as possible around the world. 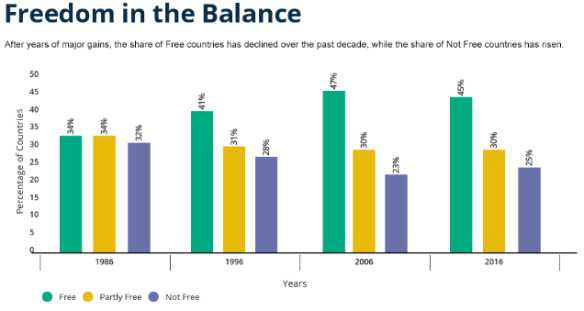 In this respect, look at the latest report from Freedom House which measures the state of freedom around the world on an annual basis.

Conclusion.  Democracies rarely go to war against one another.  Other democratic countries are our best friends and so we want more of them.  But there is nothing simple or obvious in figuring out how to accomplish this.