The two main themes on this website, “It Does Not Add Up,” are that the U.S. national debt is too high and that our economy is growing too slowly.  How can we shrink the debt (as a percentage of GDP) and how can we make the economy grow faster?  I make use of all sources of information which shed light on these two fundamental issues. 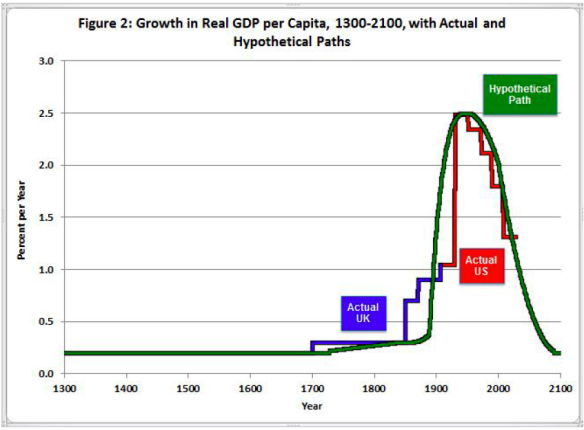 Today I briefly discuss the work of the Northwestern University Economist Robert Gordon, summarized in his new book, “The Rise and Fall of American Growth.”  His basic thesis, see the above chart, is that human civilization experienced essentially no economic growth up until about 1700, then slow growth occurred mainly in the UK and US up until about 1870 followed by explosive growth mainly in the US up until about 1970.  Since 1970 growth has slowed way down except for a brief spurt from 1994 – 2004.
According to Mr. Gordon, these growth periods were caused by Industrial Revolution #1 (steam, railroads), IR #2 (electricity, internal combustion, modern plumbing, communications, petroleum), and IR #3 (computers, internet, mobile phones), all of which led to productivity growth spurts which have by now largely run their course. Not only are we out of industrial revolutions but there are, in addition, stiff headwinds working against economic growth.  For example:

Mr. Gordon makes a voluminous case for the slowing down of economic growth, the basic reasons why this is happening, and the social forces which are making it worse. Next: How should public policy respond to this huge challenge?

2 thoughts on “Why Economic Growth is Slowing Down”