As regular readers of my blog posts know, I am not enthusiastic about either of our two main presidential candidates because neither of them has a good grasp of our two biggest economic problems which are:

Hillary Clinton promises “equitable” growth but her policy proposals will lead to a big increase in spending (bad idea) on projects of dubious value in speeding up economic growth. Donald Trump would hurt the economy with immigration controls and trade restrictions.  His proposal for lower tax rates (good idea) needs much improvement to avoid increasing annual deficits. 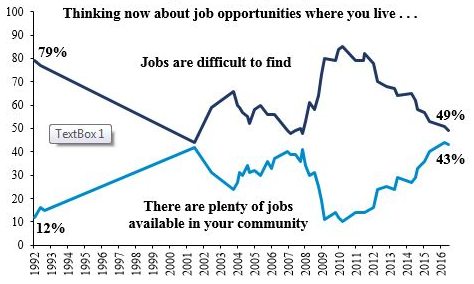 Mr. Trump’s biggest problem, however, is his negative message about life in America today. Yes, we need stronger border security but we don’t need a Fortress America.  As the American Enterprise Institute has just reported, worker satisfaction is greatly improved since 2009 and workers are now much less anxious about job security than just a few years ago.
There is a really good way for Mr. Trump to sound a more positive note.  He could very easily take up the major themes of the Republican House Plan, “A Better Way” for solving America’s major economic problems.
Conclusion. There is an overwhelming desire for change in America, for new leadership which breaks out of the corruption, cronyism and elitism so rampant in Washington DC today.  But Americans are natural optimists and want a leader who can look forward to a bright future for our country.