I have been focusing lately on America’s two biggest fiscal and economic problems:

A few days ago in “The Great Wage Slowdown and How to Fix It,” I laid out a fairly specific proposal to make a substantial reduction in tax preferences in order to cut tax rates across the board and especially for the 64% of taxpayers who do not itemize deductions.  These are the middle- and lower-income workers with stagnant incomes who would likely spend any tax savings they received thereby giving the economy a big boost. Let’s examine whether or not this is a realistic course of action.

The above chart from the Congressional Budget Office document, “The Distribution of Major Tax Expenditures in the Individual Income Tax System,” shows that, for example, the upper 10% of households by income receive about 40% of the total $1 trillion in individual tax expenditures per year.  Furthermore, this same top 10% of tax payers have an income of about $140,000 or more (Congressional Research Service). My basic idea is to shrink tax preferences by $250 billion per year and to lower tax rates for middle- and lower-income non-itemizers by this same amount.  If we assume that they would spend 2/3 of this new income, it would boost the economy by $170 billion per year which is 1% of GDP.
A reasonable way to achieve this savings is to expect higher income earners to contribute a greater percentage of their tax preference savings.  For example:

This back-of-the-envelope calculation is not intended to be definitive but rather to suggest what can be done along these lines.  Those who are more well-off need to make bigger sacrifices in getting our economy back on track.

The United States has two fundamental economic and fiscal problems at the present time.  First of all, the economy is growing too slowly to create enough new jobs.  In fact, there are now 24 million people either unemployed or underemployed.  Secondly, federal tax revenue is not sufficient to pay the bills.  Of course, these problems are interrelated.  If the economy were growing faster, more tax revenue would be generated and deficit spending would be lower. 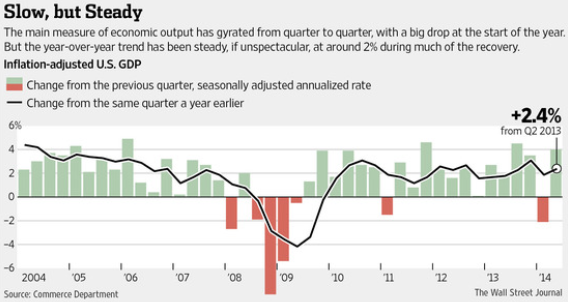 At the same time, changes in society, such as globalization and technological progress, are creating higher levels of inequality.  Economic inequality is inevitable in a free society but too much of it will create resentment.  The best way to minimize such resentment is to make sure that incomes are rising for all.  In other words, first speed up growth.  If inequality can also be reduced, so much the better.
A few days ago my post “How to Increase Growth and Decrease Inequality at the Same Time!” presented such a plan.  The idea is to enact broad-based tax reform, whereby tax rates are lowered for everyone, offset by shrinking tax deductions.  The 64% of taxpayers who do not itemize deductions will receive a big tax cut.  Since they are the lower and middleclass wage earners with stagnant incomes, they will tend to spend their tax savings, thereby giving the economy a boost.  But this means that the 36% of (wealthier) taxpayers who do itemize deductions will, on average, end up paying higher taxes.  Overall, this represents a shift from the wealthy to the less wealthy and therefore lessens inequality.
Here is a concrete example to illustrate the magnitude of what can be accomplished:

I emphasize that this is an oversimplified illustrative example to demonstrate what can be achieved with a plan of this nature.  Hopefully it will be more thoroughly analyzed by an expert economist, which I am not!