In a recent post I discussed the issue of slow economic growth in the U.S. and why it is so harmful and dangerous to our nation’s future.  In short, it not only deprives many citizens of a more prosperous life and makes it more difficult to shrink our annual budget deficits, but it also endangers our national security as our chief competitor, China, grows faster than we do.
In the long run, an economy can expand only at a rate sustained by the growth of its labor force and the productivity of its workers.  I have previously pointed out  that there are far too many prime working age men who are unemployed. 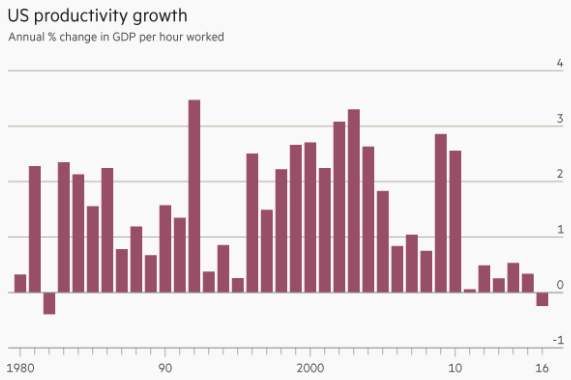 Today let’s talk about the rate of productivity growth (see the above chart).  In particular:

My last several posts have discussed the poor economic proposals of both major presidential candidates. Today’s New York Times has an excellent article by Neil Irwin, “Here’s What’s Going Right and Wrong in the U.S. Economy.”  According to Mr. Irwin and the NYT:

Conclusion. Wages are going up and consumers have money to spend. But worker productivity can only increase when business makes new investment.  This is not happening nearly fast enough. The House Republicans have an excellent plan to encourage business investment.
Is either presidential candidate paying attention to this opportunity to speed up economic growth?
I, for one, am waiting to find out!

The economist Alan Blinder has just reported, “The Mystery of Declining Productivity Growth” that U.S. productivity growth has fallen dramatically in the last few years.  “The healthy 2.6% a year from 1995-2010 has since been an anemic 0.4%.  What’s scary is that we don’t know why.”

The economists Edward Prescott and Lee Ohanian believe the productivity slowdown is caused by a corresponding slowdown in new startups (as illustrated by the above chart).  They point out, for example, that:

Consistent with the recommendations of James Bessen in a recent post of mine, “Learning by Doing,” Messrs. Prescott and Ohanian recommend policy changes such as:

In today’s New York Times, the economist Tyler Cowen wonders whether our economy is in the midst of a “Great Reset.”  “Perhaps the most crucial issue is whether economies will return to normal conditions of steady growth, or whether we are witnessing a fundamental transformation” to a less productive economy.
Here’s another way to put it: shall we attempt to adopt better pro-growth policies or shall we just give in to the status quo and accept that we can’t do any better?  Are we optimists or are we pessimists?

The social economist William Galston has a column, in last week’s Wall Street Journal, “Closing the Productivity and Pay Gap”, discussing the large gap between the rising productivity of American workers and the stagnant pay level which has developed since 1973 (see below).  He points out that “the erosion of the compensation/productivity link has made it harder to sustain robust domestic demand for goods and services, which constitutes more than two-thirds of our entire economy.  As the gap widened, U.S. households responded by sending more women into the workforce, expanding the numbers of hours worked, and taking on a greater burden of debt.  These strategies have hit a wall.  Unless compensation rises more rapidly, stagnant domestic demand will depress economic growth as far as the eye can see.”  In other words, workers are no longer receiving their fair share of the productivity gains.  And this retards the increased economic growth which we all desire.  Without detracting from the seriousness of Mr. Galston’s argument, I would like to make several observations which are pertinent to the discussion.

First of all, as pointed out by the Heritage Foundation (in the second chart), wage stagnation since 1973 does not take into account the growth of total compensation including healthcare and other benefits.  And since healthcare costs are twice what they are in any other country, this is a huge drag on the growth of worker’s pay.  In other words, if the U.S. were able to cut healthcare costs nearly in half, as should be possible with a more efficient system, then the hundreds of billions of dollars saved would give a huge boost to paychecks.

Secondly (as shown in the last chart), there is a direct correlation between wages and education level for U.S. workers.  Of course, boosting educational outcomes is much easier said than done and, in any event, is a long term process.  Nevertheless, any highly motivated and ambitious person can increase their earnings prospects by succeeding in school. 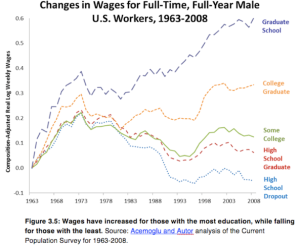 Finally, a combination of minimum wage increases and perhaps an expansion of the Earned Income Tax Credit can help those people at the lowest levels of the income scale earn a living wage as long as they are willing to work.
As Mr. Galston said in an earlier piece, “We need nothing less than a new norm – a revised social contract – that links compensation to productivity.  And because we cannot return to the conditions that once sustained that link, we need new policies to bring it about.”

The Brookings Institution social economist, William Galston, has an interesting column in yesterday’s Wall Street Journal, “The U.S. Needs a New Social Contract”, deploring the fact that worker compensation (i.e. wages + benefits) has not kept up with gains in worker productivity since the 1970s.  Here is a chart published by the Economic Policy Institute showing the divergence between productivity and compensation for a “typical” ( i.e. in the middle) worker beginning in the 1970s: 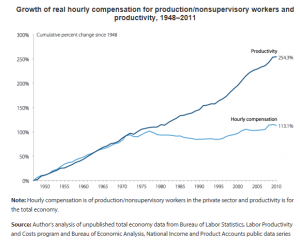 The Heritage Foundation’s James Sherk has addressed this same question in a recent report “Productivity and Compensation: Growing Together” and shows that the “average” compensation of an American worker does track productivity very closely as shown in the chart below:

What is the explanation for this apparent discrepancy?  In fact, it is the difference between the average earnings of U.S. workers and the earnings of the median or middle worker.  The very high earnings of the top 10% and the even higher earnings of the top 1% raise average worker compensation way above the income level of the median worker.  In other words it is the result of the skewed and unequal distribution of incomes which is heavily weighted toward those at the top of the scale.  The typical or median worker is falling behind and is not benefitting from the steady rise in the overall productivity of the American economy.  This is what income inequality is all about.
The question is what to do about it.  Faster economic growth will create more opportunity by creating more jobs and better paying jobs.  Raising high school graduation rates as well as creating high quality technical training programs will also help.
Mr. Galston insists that this is not enough.  Too many workers will continue to lag farther and farther behind.  We could raise the Earned Income Tax Credit for low income workers but this would be very expensive in our currently tight fiscal situation which is likely to continue indefinitely.
Do we need a new social contract?  If so, what form will it take?  How will we pay for it?  These are indeed very difficult questions to answer!