Mr. Buffett made this quip in a recent interview with CNBC.  Since the economy has historically grown at a rate of about 3%, Mr. Buffett is saying that we’ll be alright as long as economic growth exceeds deficit spending.  This is generally correct but, as Mr. Buffett well knows, the situation is more complicated than this. 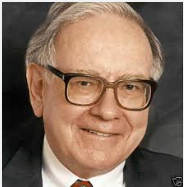 A very good, and nontechnical, discussion of this whole subject can be found in the newly published book, “The Death of Money: the coming collapse of the international monetary system” by the financier James Rickards.  Look at Chapter 7, “Debt, Deficits and the Dollar.”
Simplifying Mr. Rickards’ approach a little bit, and keeping it in Mr. Buffett’s framework, for a stable economy we need to have
G > D
where the nominal growth G = real GDP + I (I is the rate of inflation) and the deficit D = S – T  (S is spending and T is tax revenue).  I have included interest paid on the debt as part of total spending.  As long as the left hand side is greater than the right hand side, the economy is growing faster than the deficit and the accumulated debt will shrink as a percentage of GDP. Notice that the rate of inflation affects the left hand side of the inequality while the interest rate is part of the right hand side.
Negative inflation is deflation which is clearly undesirable.  The Federal Reserve’s current target for inflation is 2%.  The challenge for the Fed is 1) to keep inflation high enough and interest rates low enough so that G > D, while at the same time, 2) to make sure that inflation does not grow so high as to destabilize the markets.
Given our underperforming economy with low real GDP growth, and huge deficits, Mr. Rickards is pessimistic that the Fed can continue successfully “in the position of a tightrope walker with no net … exuding confidence while having no idea whether its policies will work or when they might end.”
Thus the gloomy title for his book.

4 thoughts on “The Big Picture on Debt Part III. The Oracle of Omaha Speaks”