With a total national debt of $17.8 trillion, of which close to $13 trillion is public debt (on which we pay interest), it is easily understood that the U.S. has a very serious fiscal problem. At the present time the public debt is 74% of GDP and this already high percentage is predicted by the Congressional Budget Office to keep growing indefinitely.
The biggest driver of spending growth going forward is the cost of healthcare.  For example just the three programs, Medicare ($492 billion), Medicaid ($280 billion) and Veterans Healthcare ($54 billion), cost a total of $826 billion per year in federal dollars.  And these costs are all increasing rapidly.  Of course, private healthcare spending, currently about $2 trillion per year, is also growing rapidly.  Overall, the U.S. spends 17.3% of GDP on healthcare spending, public and private, almost twice as much as any other developed country.
How are we going to address this enormous cost issue going forward? The Affordable Care Act (aka Obamacare) doesn’t do it.  What it does do is to provide healthcare to more people under our current model of employer provided health insurance with Medicare for the elderly and Medicaid for the poor.  It is this model which is broken and must be reformed. Basically we have two choices for how to do this.  Either we switch over to a “single payer” system like most of the other developed countries have or we establish a far more efficient free market system.

As the above chart shows, right now we have a composite system and it is just not cost-effective. There are plenty of experts who claim that a free market cannot work in healthcare.  For example, the tax lawyer, Edward Kleinbard, in a new book, “We Are Better than This: how government should spend our money” argues that what a free market gives us is:  unavoidable controversy for excluded pre-existing conditions, moral hazard for risky behavior, uncertain premiums for permanent insurance, fragmented healthcare markets, monopoly provider organizations leading to price opacity, very high administrative costs, etc. 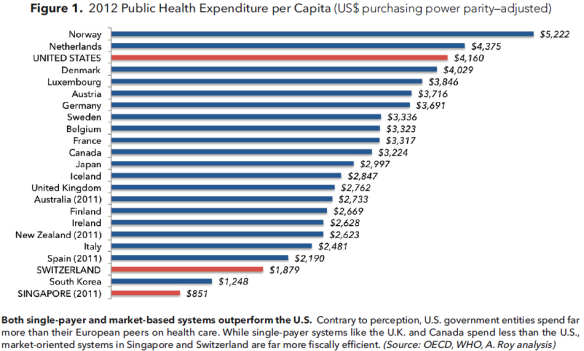 The Manhattan Institute’s Avik Roy has a different point of view.  In his proposal, “Transforming Obamacare,” (http://www.manhattan-institute.org/pdf/mpr_17.pdf) he points out that there are two countries, Switzerland and Singapore, which operate highly regarded free-market healthcare systems at very low public cost. Stay tuned for further discussion!

2 thoughts on “Is A Free Market Possible in Health Care?”