The Federal Reserve Bank plays an important role in our economy by trying to keep inflation low and stable but also by trying to make recessions less severe by increasing the money supply when the unemployment rate is high. My last post, “What the Federal Reserve Can and Can’t Do” emphasizes that, as Ben Bernanke says, “the Fed has little or no control over long term fundamentals,” such as economic growth which depends on increases in productivity which, in turn, are heavily influenced by fiscal and regulatory policy. 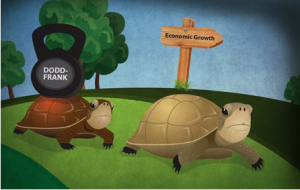 The American Enterprise Institute’s Peter Wallison explains very clearly in “The slow economic recovery explained,” why, for example, the Dodd-Frank Act of 2010 is having a harmful effect on economic growth:

Conclusion. Monetary policy alone, as conducted by the Federal Reserve, cannot return our economy to good health. This can only be accomplished by increasing productivity which is aided by smart fiscal and regulatory policy. Dodd-Frank is an example of regulatory policy which is hurting economic growth by having a harmful effect on main street banks.

2 thoughts on “Dodd-Frank Is Hurting the Recovery!”