North Korea recently launched another long-range rocket as reported by the New York Times, the Wall Street Journal, and the Washington Post The editorial boards of all three newspapers deplore this development but differ in suggesting how the U.S. should respond.

Ronald Reagan’s launch of the SDI in the 1980s helped win the cold war. The Bush Administration is responsible for the missile defenses which exist today, including long-range missile interceptors in Alaska and California and Aegis systems aboard Navy warships.  The Obama Administration has cut its missile defense budget request from $9.8 billion in 2016 to $9.1 billion for 2017. 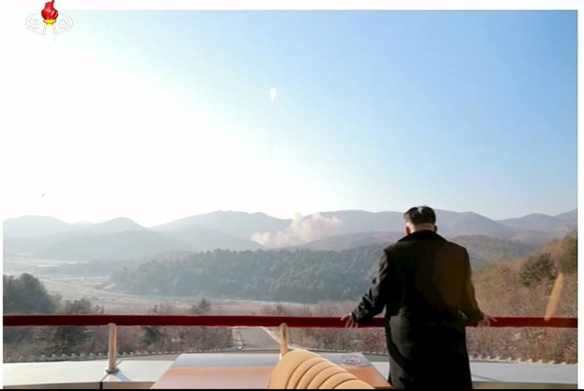 Admiral Bill Gortney, Commander of the North American Aerospace Defense Command, says that “We’re ready 24 hours a day if he’s (Kim Jong Un) dumb enough to throw something at us.”  But any miss would be catastrophic and a 100% interception rate won’t happen without engineering advances and presidential leadership.
SDI should be a very high priority within the overall military budget.  Our national security depends on it!

The two biggest problems facing our country today are a stagnant economy and an exploding national debt.  Faster economic growth would help pay our bills by bringing in more tax revenue.  It would also create more jobs and give a boost to stagnant wages.  One of the causes of this stagnation is that our economy has become less entrepreneurial over time as shown by this often cited chart from the Brookings Institution. 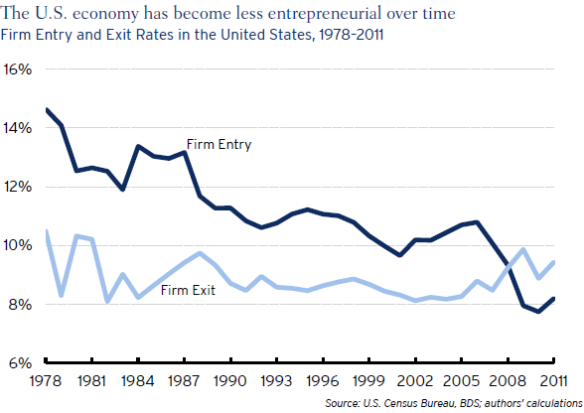 A very interesting new book by James Bessen, “Learning by Doing: the real connection between innovation, wages and wealth.” looks at both our economic history and our current economy to understand how society can best meet the challenges posed by new technology.  Mr. Bessen  identifies the basic problems as follows:

Mr. Bessen concludes:“The practical skills of ordinary people have been a wellspring of widely shared wealth for 200 years, and the economic power of mighty nations rests on the technical knowledge of the humble.  Provide the means for ordinary workers to acquire the skills and knowledge to implement new technology today and the economic bounty will not only grow, it will be widely shared.”
What are the roadblocks to implementing Mr. Bessen’s recommendations?  I will return to this question later.