Responsible tax reform will be highly beneficial for the U.S. economy because:

The Trump tax plan, described here and here, has the following features:

Conclusion. The Trump tax plan has some good features as well as some poor ones. Reducing tax rates is a good idea.  But adding to annual deficits is a very bad idea.  With some effort it is possible to reduce tax rates in a revenue neutral way.

Our economy is doing a little better recently but not nearly as good as it could be.  In my last post, “Men without Work,” I present Nicholas Eberstadt’s data that a significant part of the problem is the very large number (9.5 million) of prime working age (25 – 54) men who are unemployed and not looking for work.
Statistically, such men are likely to be un-workers if 1) they have no more than a high school diploma, 2) are unmarried and without dependent children, 3) are not immigrants and 4) are African American.
Two other relevant factors are 1) the huge increase in employment for prime working age women, from 34% in 1948 to 70% in 2015 and 2) the very high male arrest and incarceration rates for blacks and those without a high school diploma.
Obviously, it is highly detrimental to society to have such a large number of men who are idle during their prime working years.

Here are several ways to address this problem:

Conclusion. One good way to speed up economic growth is to put more unemployed prime working age men back to work. There are several very concrete steps which can be taken to do this.

My last post responds to a reader who is pessimistic about the future of our country and in fact of the whole world.  He thinks that the environment is deteriorating, that rapid economic growth is unsustainable and that there is too much income inequality between high and low wage earners.
My response to him is to refer to the recent book, “The Rational Optimist: how prosperity evolves” by Matt Ridley.  Mr. Ridley persuasively argues that not only has the human race made huge strides in recent times but that this progress is intrinsic to evolved human nature and is likely to continue indefinitely:

Conclusion. As long as human beings are free to engage in exchange (trade) and specialization (acquisition of skills), prosperity will continue to evolve and human life will become better and better.

My last several posts, here and here, have discussed the economic plans of both Hillary Clinton and Donald Trump.  In short,

They both need to take our actual current economic situation into account as follows:

The House Republicans have “a better way.” Their tax reform plan, among many other good features, would

Conclusion. The House Republicans have a sensible plan for getting our country back on a much faster economic growth track. Regardless of who is elected president, the House is likely to stay under Republican control.  I am waiting to see if either of the presidential candidates will figure this out and adjust their campaign messages accordingly.

My two main sources of information for this blog are the New York Times and the Wall Street Journal. In particular I am always eager to read Eduardo Porter’s weekly column, Economic Scene, in the NYT.  He frames the issues very well, even though I often disagree with him on the details.

Yesterday’s column, “In Brexit and Trump, a Populist Farewell to Laissez-Faire Capitalism,” points out the similarities in the white working class support for both Brexit and for Donald Trump.  It then goes on to advocate for what the economist Larry Summers refers to vaguely as “responsible nationalism.”
I couldn’t agree more with Mr. Porter and Mr. Summers that we need policies to boost the fortunes of blue collar workers, and here are some good ways to do it:

Conclusion. Our country faces severe problems. If we don’t get deficit spending under greater control, we risk a new and more severe financial crisis.  If we can’t create more and better paying jobs for the modestly educated, we will be faced with Trump-like demagogic candidates for president every four years. It will be a huge challenge for us to extricate ourselves from this mess in a peaceful manner.

The U.S. economy is in a peculiar and potentially perilous situation:

What explains our relatively low, and steadily dropping, unemployment rate when overall economic growth, and wage growth in particular, are so slow? 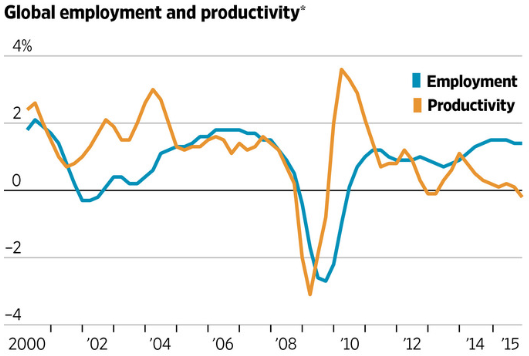 It is low productivity growth as the New York Times’ Neil Irwin, has recently pointed out: here  and here.

We do not have to accept low productivity growth as immutable. As I have recently discussed here, and here, better government policies can boost labor productivity and therefore boost economic growth as well.  Here is a brief summary of what needs to be done:

In other words, our severe slow growth predicament can be greatly ameliorated if we would adopt more sensible economic policies. It is a shame that this is so hard to do!

In my last post I presented the argument that voters are often more reasonable than the populist leaders who are trying to appeal to them.  They would rather hear something more optimistic than rage against a dangerous world. 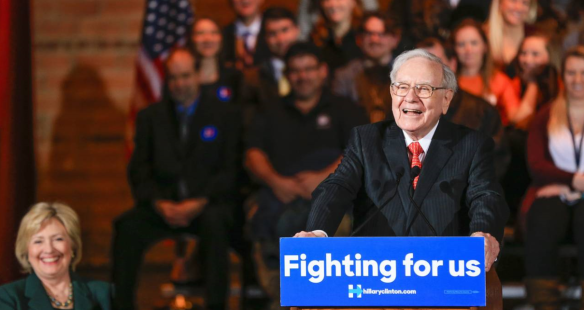 But there is a difference of opinion on how to reach these voters:

The U.S. economy has grown at the rate of only 2.2% since the end of the Great Recession in June 2009.  This is much slower than the average rate of growth of 3% for the past fifty years.

The economists Glenn Hubbard and Kevin Warsh, writing in the Wall Street Journal, “How the U.S. Can Return to 4% Growth,” point out that:

The economist John Taylor, also writing in the WSJ, “A Recovery Waiting to Be Liberated,” explains that the growth of the economy, i.e. growth of GDP, equals employment growth plus productivity growth.  He then points out that:

Given the strong headwinds of globalization and ever new technology affecting the U.S. economy, we especially need new policies such as:

In other words, rather than accepting our current situation as “the new normal” or as unalterable “secular stagnation,” we need to “give growth a chance”!

The Bureau of Labor Statistics has just reported very good news in its monthly Job Openings and Labor Turnover Survey.  For the first time since 2000, the number of job openings now exceeds the number of new hires, as shown in the chart just below.  This means that wages will start to grow faster as employers have to compete harder for new workers.

This is an early indication that our economy will likely soon resume a faster rate of growth than its average of 2.3% since the end of the Great Recession in June of 2009.  There will be many benefits.  The unemployment rate should continue to keep heading downward from its current level of 5.5%.  More unemployed and underemployed workers will be able to find satisfactory jobs.  The labor participation rate should start to head back up from its historically low current state.
The Federal Reserve is likely to begin raising short term interest rates sooner rather than later in order to keep inflation in check before it has a chance to heat up.  In other words we may be breaking out of the ambiguous state of slow-growth secular stagnation in which we have been trapped for six years.
All of this is very good news as long as Congress realizes that it is now even more urgent than ever to put our massive public debt of $13 trillion on a downward path, compared to the total economy, before interest rates begin to rise substantially and eat us alive with interest payments on this huge debt.
In this regard the Budget Plan approved by Congress just this Spring, which will lead to a balanced budget over ten years, looks very attractive indeed.  It will be a mammoth job to achieve such a milestone in fiscal restraint, but doing so will lead to a more secure and prosperous future for all Americans.

As I have mentioned before, I am a volunteer for the nonpartisan Washington D.C. think tank “Fix the Debt.”  As such I give presentations to civic organizations in the Omaha area about our debt problem and what we can and should do about it.  I have now given four such talks and have another one coming up next week.

What is most difficult for me is to try to convey a sense of urgency about addressing this problem. Most people deplore deficit spending in a general sense but not nearly enough people think that dealing with it should take priority over current presumably pressing spending needs such as, for example, depletion of the highway trust fund, expanding military spending, or improving early childhood education, just to be specific.
So here is how I am going to try to create a greater sense of urgency.  Several months ago I had a post entitled, “The Slow Growth Fiscal Trap We’re Now In” in which I said (in brief summary) that our current economic condition of

This is the predicament we’re now in.  Do we consciously maintain a slow growth economy, with all the unemployment pain and stagnant wages which this entails, or do we speed things up, enabling more people to go back to work, and also deal with the higher inflation and interest rates which this will entail?
Faster growth may well eventually come on its own anyway and then we’ll be forced to fix our fiscal problems at a time when they’ll be much worse than they are now.
Isn’t it clear that it is much better to act now in a responsible manner rather than to wait and have to react hurridly later on when the problem is much worse?

Join 2,220 other followers
It Does Not Add Up
Blog at WordPress.com.
Loading Comments...