As a fiscal conservative, I am worried about our nation’s future. The public debt (on which we pay interest) is now 75% of GDP, the highest level since right after WWII, and growing steadily.  Furthermore, our economy has just barely recovered from the Great Recession and is expanding too slowly to revive widespread prosperity.  Neither of the two main presidential candidates, Hillary Clinton nor Donald Trump, is talking seriously about our huge debt and neither has a credible plan to boost economic growth. 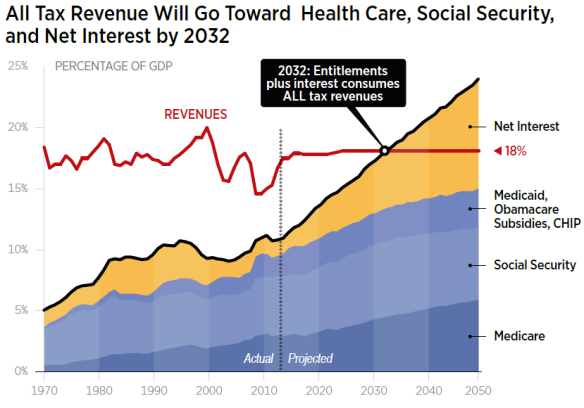 The above chart from the Heritage Foundation is a vivid way of illustrating this problem:

There are three possible ways to offset this bleak picture:

Conclusion. If the U.S. cannot get its debt and slow growth problems under control, it risks losing its status as the world’s major superpower. This would be a calamity for both our own national security and the peace and stability of the entire world.

For the past week I have been discussing different aspects of our alarming debt problem as vividly illustrated in a recent report from the Congressional Budget Office  (see chart below).  My last post discusses what I call the Buffett Model:  G > D, meaning that as long as nominal growth G (real growth plus inflation) is greater than the deficit D, then the accumulated debt will decrease as a percentage of GDP and the debt is said to be “stabilized”.  This, of course, is what has happened in the U.S. historically after all of our major wars and especially after WWII (see below).  The problem is that our current situation in 2014 appears much bleaker going forward because the debt is projected (by CBO) to just keep on growing indefinitely. 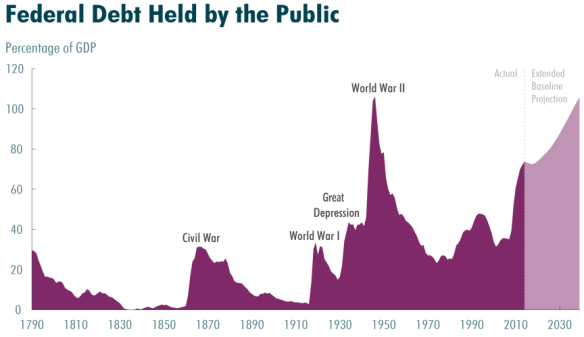 The BRITS model reduces to the Buffett model by letting G = R + I and D = (S – T) + B.  The value of this more general model is to show the relationship between all five of these important variables.  To meet the objective of stabilizing debt, according to this intuitive model, we should increase both R and I and decrease S – T and B.
The Federal Reserve is involved by keeping B as low as possible and making sure that I is large enough (but not too large or other problems will occur).  Congress can help by cutting spending or raising taxes but, of course, both of these actions are hard to do politically.
If real growth R is high enough then the desired inequality will hold and debt will be stabilized.  But how is this accomplished?  The Fed has been trying to increase growth through quantitative easing but it’s not working very well.  Many economists think that it would be more helpful for Congress to implement broad based tax reform, whereby tax rates are lowered and loopholes and deductions are closed in a revenue neutral manner so that overall tax revenue remains the same.  But nobody wants to lose their own deductions so this is hard to do. 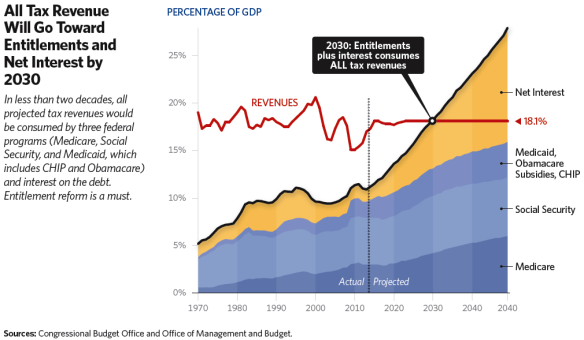 As much as faster growth will help, it is still critical for Congress to get spending under control.  The above chart from the Heritage Foundation shows that under current trends by 2030 federal spending will have increased so much that all federal tax revenue will be spent on just entitlements and interest payments alone!  Since this is unrealistic, some sort of a major new crisis is likely to occur before 2030!
Conclusion: The BRITS model helps to understand the complexity of our debt problem and some of the steps that need to be taken to alleviate it.  I will return to it in the future.

There has been a lot of public attention given to these topics recently.  Our stagnant economy since the end of the recession almost five years ago has meant high levels of unemployment and underemployment which naturally causes widespread discontent.  The 50th anniversary of President Johnson declaring War on Poverty provides an opportunity to look back and evaluate its success.
A very good summary of where we stand on poverty was given two years ago by Robert Rector and Rachel Sheffield of the Heritage Foundation: “Understanding Poverty in the United States: Surprising Facts about America’s Poor”.  The authors used 2010 census data for their study.  Poverty was defined to be a cash income of $22,314 or less for a family of four in 2010 (which increased to $23,550 in 2013).  They pointed out, for example, that “96% of poor parents stated that their children were never hungry at any time during the year because they could not afford food.”  The chart below shows that poor households, in general, have many of the common amenities. 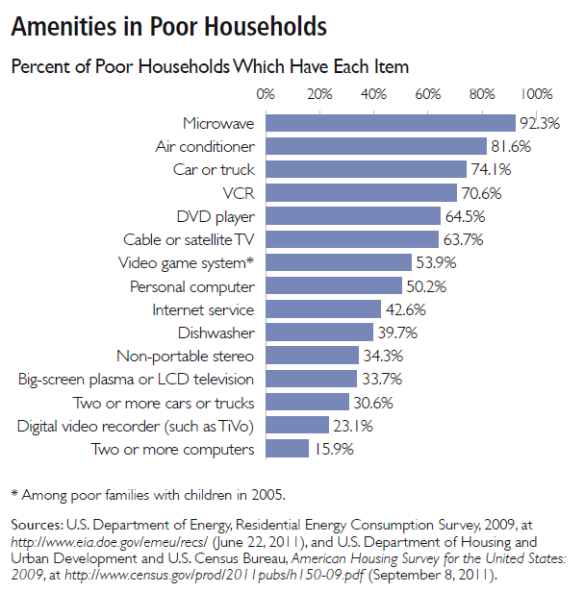 In other words, the close to $1 trillion spent per year ($871 billion in 2010) by federal and state governments on means tested assistance for the poor has largely eliminated destitute poverty in the U.S.  Further progress will require successfully addressing both the collapse of marriage and the lack of parental work in low-income communities.  These very difficult problems can only be addressed with a long term educational effort to turn poor children into productive citizens.
Conclusion:  the War on Poverty has had reasonable success at huge cost and further gains will be more expensive and more drawn out over time.  We’ve already started on this second phase by emphasizing early childhood education and so the focus now should be to implement this new direction.
Next step: it’s now time to direct our serious attention to the issues of inequality and mobility.  That will be the subject of my next post!

In his usual provocative fashion, New York Times columnist Paul Krugman says that Republicans are “Enemies of the Poor” because “they’re deeply committed to the view that efforts to aid the poor are actually perpetuating poverty, by reducing incentives to work.” 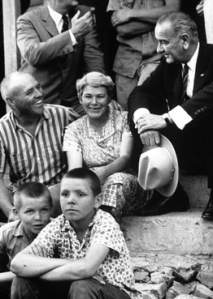 But the Heritage Foundation’s Robert Rector has recently pointed out in the Wall Street Journal, “How the War on Poverty Was Lost”, that “the typical American living below the poverty line in 2013 lives in a house or apartment that is in good repair, equipped with air conditioning and cable TV.  He has a car, multiple color TVs and a DVD player.  The overwhelming majority of poor Americans are not undernourished and did not suffer from hunger for even one day of the previous year.”  In fact we are now spending $600 billion a year of our $3.4 trillion federal budget and another $230 billion by the states to fight poverty.  The poverty rate was 19% in 1964 and is 16% today (when government benefits are included).
Mr. Rector reminds us that “LBJ’s original aim (in initiating his antipoverty program) was to give poor Americans ‘opportunities, not doles’.  It would attack not just the symptoms of poverty but, more important, remove the causes.  By that standard, the war on poverty has been a catastrophe.  The root ‘causes’ of poverty have not shrunk but expanded as family structure disintegrated and labor force participation among men dropped.”
So what should our poverty agenda look like going forward?  We are already providing the basic necessities of life.  Our future efforts should therefore be focused on improving the quality of life for the poor.  This means more effective education and job training.  It means more effort to keep families together by reducing marriage penalties.  But most of all it means providing more opportunities for employment and job advancement.  This requires faster economic growth.  There are many ways to accomplish this.  Back to square one!
The true enemies of the poor are those who refuse to accept the progress which has been made in the War on Poverty and the need to change our approach in order to make further progress.

The Heritage Foundation’s Lindsey Burke has recently described, in “A-Plus: A Conservative Alternative to NCLB”, a new bill, The Academic Partnerships Lead Us to Success Act, recently introduced into both houses of Congress.  A+ would allow states to completely opt out of all programs which fall under No Child Left Behind and send NCLB funding back to the states in the form of block grants to be used for the most pressing educational needs.
Under such an arrangement, states would have to describe how they plan to improve education for disadvantaged students.  Performance data for various student demographic groups would be disaggregated and states would have to demonstrate how they have narrowed achievement gaps.  Many other safeguards would also be in place.
The problems with NCLB are well known.  The Adequate Yearly Progress requirement, that all students be proficient in reading and mathematics by 2014, is unrealistic and has led to the watering-down of proficiency standards.  The Highly Qualified Teacher mandate is too rigid and should be under the purview of local education leaders.  Standards and assessments, such as the Common Core and national tests, would no longer be dictated by the U.S. Secretary of Education.
There are huge budgetary ramifications of A+.  At the present time there are over 80 individual grant programs under NCLB, which have a total annual budget of more than $25 billion.  Consolidating all of these numerous individual programs into a single K-12 block grant to each state would easily allow a 20%, or $5 billion, annual savings to the federal government as well as saving states and local school systems much expense in administering the newly streamlined federal education policy.
Here is an example of a good way of improving one particularly large and expensive federal program.  This sort of retrenchment needs to happen throughout the federal government.  Let’s get started in doing what needs to be done!