The Republican tax plan has many good features and is now moving along in Congress. The best feature of all is reducing the top corporate rate from 35% to 20%.  This will make the U.S. internationally competitive and create a strong incentive for all multinational companies to conduct more business in the U.S. and for U.S. multinationals to bring their profits back home for reinvestment.
The Tax Foundation estimates that the Senate version of the Plan will lead to the creation of 925,000 new jobs and an after tax income gain of $2,598 for a middle-income family over a ten year period.
But there are several parts of the plan which could be significantly improved.  For example:

Conclusion. There are lots of good features in the Tax Reform Plan. Several changes would make it even better.  As soon as it achieves stability in the legislative process, the CBO will analyze its fiscal and economic effects.  At this point revenue neutrality will be essential for achieving broad support.

As Congress turns its attention to tax reform, there is a clear bipartisan consensus on the fundamental principles to employ, see here, here, here, and here.

The Tax Foundation has outlined several different approaches to tax reform which meet the above guidelines.  Their Option A is especially attractive:

Conclusion. There are many attractive features in this plan. Being revenue neutral, with strong economic growth, means that the increase in tax revenue will shrink our huge current annual deficits.  Only the very wealthy top 1% of taxpayers will see their income (slightly) decreased.  The substantial decrease in the corporate tax rate will incentivize multinational corporations to bring their overseas profits back home for reinvestment.

With Donald Trump dropping in the polls, whirling out of control and unwilling to withdraw from the race, my attention now turns to Hillary Clinton and what she is likely to do as President. I divide this discussion into good news and bad news. 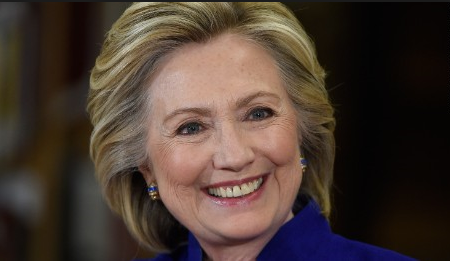 Unfortunately, the current Clinton tax plan is anti-growth. As analyzed by the Tax Foundation, her plan would:

Conclusion. The Clinton tax plan has some attractive features such as reducing taxes on small business. But overall it would slow economic growth in the name of reducing income inequality.  A Republican House in the new Congress would likely be able to bargain for a much better plan.

After seven straight years of anemic, sub-par growth of 2.1% annual growth, one of the most important questions in public policy today is whether or not the U.S. economy can do better. I have devoted my last three posts, here, here, and here, to this question, presenting both positive and negative points of view. 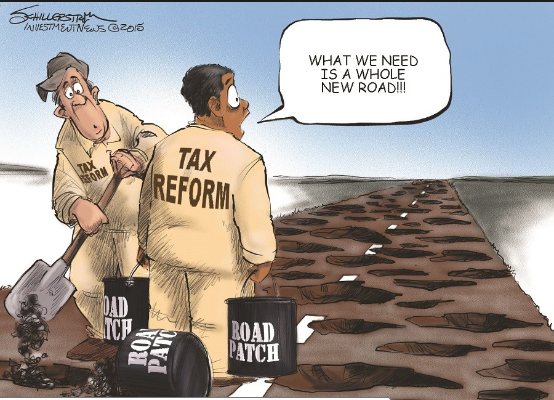 There are very definitely strong headwinds slowing down growth but there are also specific strategies that are very likely to help speed up growth. One of these is tax reform.  The nonpartisan Tax Foundation (TF) has just issued an excellent report, “Options for Reforming America’s Tax Code” with many good ideas. Here are just three of the many different examples presented.  But they show the powerful effects that would be generated by significant tax reform.

What is the better strategy? To be pessimistic and accept the point of view that faster growth is just too difficult or to adopt specific policies which are likely to help?

In a recent post I pointed out that both Republican and Democratic presidential candidates are being unrealistic with their tax reform proposals:

The nonpartisan Tax Foundation has just released a new report, “Options for Broadening the U.S. Tax Base,” describing three different ways to do this:

Combined with marginal tax rate cuts, each of these options would lead to substantial economic growth.  However, the first option, ending the exclusion of employer-sponsored health insurance, is unlikely but rather this exclusion could be turned into tax credits as part of further healthcare reform.  Likewise, removing the cap on the social security payroll tax is more likely to be used to raise additional revenue to make social security financially sound for the long run.
However, the single measure of capping itemized deductions at $25,000 per individual could be combined with

Such changes would be revenue neutral and would lead to a long term GDP gain of 2.7%, a long term wage rate gain of 2.2% and a ten year dynamic revenue gain of $759 billion.
Conclusion:  it is possible to cut tax rates, broaden the tax base and grow the economy all at the same time and without increasing the deficit.  This is what we should be doing!

My last two posts, here and here, have pointed out the folly of the tax plans of the presidential candidates from both parties:

Sensible, i.e. revenue neural, tax reform will do wonders for the economy as this study from the Tax Foundation shows. It will bring in more tax revenue to help pay the bills.  It will raise salaries for the already employed.  It will create new jobs for the millions of unemployed and underemployed people who want them.  It will thus reduce income inequality by increasing the wages of people on the bottom. Why is this so hard for so many people to understand?

The Republican presidential candidates have been releasing tax plans and they have been analyzed by the nonpartisan Tax Foundation. It turns out that most of these plans lose revenue over a ten-year period even on a so-called dynamic scoring basis where the stimulatory effects of the plan are taken into effect.  Such callous disregard for the huge annual deficits we are now running, and our huge accumulated national debt, is totally unacceptable especially from the political party which bills itself as being fiscally responsible.

The left-leaning New York Times points this out yesterday in its lead editorial, “Why the Republican Tax Plans Won’t Work.”  According to the NYT:

This is the program the Democrats will be pushing if they win the presidency next year. It has some attractive features but the likely overall outcome will be increased deficit spending, a rapidly increasing debt and a continued stagnant economy.
Meaningful tax and regulatory reform will both be needed to get the economy growing faster than the 2% average of the past six years.  Any credible tax reform program simply must be at least revenue neutral so that, combined with spending restraint, it will put our national debt on a downward path.

Republican presidential candidate Donald Trump has just released his tax plan. Some of its basic features are:

The tax Foundation also performed an analysis of Jeb Bush’s tax plan and found roughly similar economic benefits except for a lesser number, 2.7 million, of new jobs created. But the Tax Foundation also predicts that the Trump plan would cut tax revenue by $11.98 trillion over ten years on a static basis or $10.14 trillion on a dynamic basis (accounting for economic growth effects of the plan). This compares with a loss of revenue of $3.6 trillion over ten years (static) or $1.6 trillion over ten years (dynamic) for the Bush plan.
In other words, for a substantially larger growth in new jobs under the Trump plan, there is an enormous cost in additional deficit spending.
Conclusion: I have previously criticized the Bush plan for increasing deficit spending and therefore adding to the debt when we should be shrinking it. The Trump plan is much, much worse in this respect, running annual deficits of over $1 trillion per year, moving in exactly the wrong direction.
The Bush tax plan, while needing changes to make it revenue neutral, is far superior to the Trump plan, which simply blows off any concern for deficits and debt.

Several large U.S. corporations have recently announced that they are planning to merge with foreign companies and move their corporate headquarters to a low tax country such as Ireland or Great Britain.  The Obama Administration proposes to disallow such tax inversions by requiring that after such a merger at least 50% of the stock of the new company would have to be foreign owned.  Such a regulatory fix is unlikely to solve a much more fundamental problem.

The Tax Foundation has just published a new study, “Tax Reform in the UK Reversed the Tide of Corporate Tax Inversions,” describing a similar situation in Great Britain just a few years ago and what was done to reverse it.  Basically GB took two actions:

Secondly, GB actually raises more corporate tax revenue than the U.S. and has been doing so for some years. It should be clear from this discussion that the U.S. should significantly lower its corporate tax rate.

The biggest problem in doing this is public opinion.  The organization Wallet Hub has just published its “2014 Tax Fairness Survey” which shows that only 10% of the population believes that taxes should be higher on wages than on investment income, whereas 33% thinks the reverse.  An equal tax rate on both is preferred by 57% of respondents.

This will make it politically difficult, for example, for the U.S. to match GB’s 20% maximum rate on corporations since even middle class U.S. taxpayers pay a tax rate of 25% or higher.  However it might be possible to abolish the corporate tax altogether if dividends and capital gains were then taxed at the same rate as wage income.
The most important thing, however, is to significantly lower the corporate tax rate, one way or the other, in order to incentivize U.S. multinational corporations to keep more of their business and profits in the U.S.

Nowadays there are many advocates for both individual and corporate tax reform. I have had several posts recently on this issue. A new report from the Tax Foundation “Is the Tax Code the Proper Tool for Making Higher Education More Affordable?” make a compelling argument that it is futile to try to do this.

The authors go on to say: “It is likely that instead of helping, tax credits may be contributing to the rising cost of college education. Colleges are what economists call price discriminators because they can maximize the price that each student can pay.  Because of the Free Application for Federal Student Aid (FAFSA), the college has intimate knowledge of each student’s (or family’s) income and if they are eligible for tax credits, loans, or other financial aid.  This information allows the college to simply adjust its financial aid package in order to capture the maximum value of the tax credit.  Instead of being a helping hand for students, tax credits have turned into a windfall for universities.”
There are many, many reasons to reform the tax code.  The education tax credit is just one very good example!